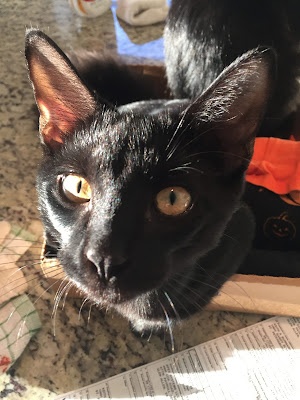 Corvid  wants you to know that I have the attention span of -- well -- maybe a kitten. I am easily amused, it seems. Therefore, when the conversation turns to which character has been my favorite to write, the answer is as easy as it is pathetic: Whoever I'm writing currently.

Maybe it's a remnant from the acting days where you inhabited one character, shook it off, and picked up another one, sometimes all in the same show. Or maybe it's just that I feel like it's necessary to fall a little bit in love with each character in the process of writing them. If I can't, who else is going to?

I have great fondness for characters in the midst of finding their power - especially when that power is in something utterly unknown to them. Edie thinks her great strength is in knowing how to blow stuff up, and to some extent, she's right, but her real strength is . . . oh. Right. I can't tell you that without screwing up the story.

The book I'm prepping to sub right now has a heroine who doesn't even know who she is. She doesn't know her own name, having been orphaned as a child and picked up to be reared by a circus troupe. She's out of her depth living in New Orleans at the start of the Civil War with a creeptastic foster mother. She thinks her power is her ability to overlooked. She's wrong.

Which of the two is my favorite? No clue. I'm working on both stories, so both characters take up space in my brain, which is part of that falling in love thing I mentioned earlier. Would it be a complete copout to say I love them both equally, just differently?