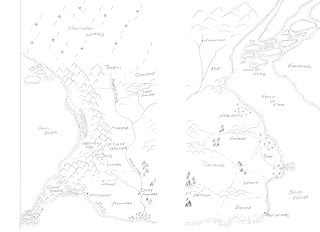 Our topic this week at the SFF Seven - one entirely appropriate for science fiction and fantasy authors - is "spending time on worldbuilding vs. actual drafting – what’s your balance?"

I've included a map here that first appeared in THE MARK OF THE TALA, the first book in the original Twelve Kingdoms trilogy. (For those who don't know - I didn't before I drew the map - the split down the middle is to accommodate the book binding.) Quite notably, I didn't draw this map until after the book had been written, the next books sketched out (very sketchily), and a couple of levels of editing completed with my publisher. At that point my editor asked me for a map of the world in the story. He thought it might make it easier for readers to follow the travels of the heroine, Andromeda, the middle princess.

So, I drew a map. Before that, the world had existed only in my head. But I'd envisioned it in vivid detail, so the task of drawing it out ended up being fairly straightforward. I spent most of my time figuring out how fantasy world maps should be drawn, and fixing logistical details like putting the split down the middle.

Later, however, I discover that most people thought I was crazy to do it this way. In fact, many SFF authors spend considerable time, even years, detailing their world maps and building out the details of the society, before they start writing.

Some of this approach, I think, comes from storytellers emerging from role-playing game experiences. In those, a great deal of effort goes into creating the world and rules before the game can be played. This is not me.

I also think that worldbuilding can be a form of pre-plotting. By creating the world and the details, the writer creates a kind of framework or outline for the story to evolve in. This is also not me.

So, it could be that I worldbuild the way I do - which is discovering what it's like by riding around in my characters' heads and observing it - because I write for discovery. That's how my process works on all levels, and faithful readers know I always say the most important thing is to own your process.

There's another reason, however, that I don't do worldbuilding before I write. I decided long ago that the only way I'd get a book written was to put down words. That sounds self-evident, but the decision is a profound one. I made a choice that NOTHING mattered more than putting down words - which includes things like drawing maps and other worldbuilding exercises.

When aspiring writers ask me about worldbuilding, when they tell me what they're doing to create their worlds, I'll say those things are great but they don't count as writing.

Email ThisBlogThis!Share to TwitterShare to FacebookShare to Pinterest
Labels: maps, own your process, Pantser, Plotting, process, procrastination, The Mark of the Tala, The Twelve Kingdoms, world building, worldbuilding