As proof Jeffe put in a lot of work last year, her second release for 2019 dropped this week. The fifth installment of her Sorcerous Moons fantasy romance series continues the adventure, the passion, and the challenges of Oria and Lonen's love. 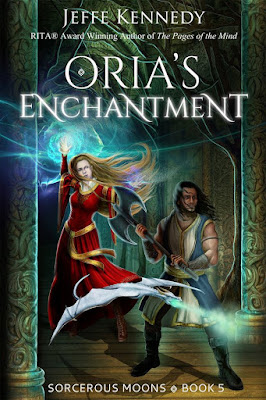 The Temptation of Power
No longer a princess and not yet a queen, the sorceress Oria welcomes the rush of power the ancient mask brings her—though the obsessive connection to it frightens her and alarms her barbarian husband, Lonen. But retreat is not an option. She must wrestle the magic to prevent an annihilating war, even if she must make the ultimate sacrifice.

A World in Flames
If Lonen wants to reclaim his throne—and save his people from destruction—he must return by sunset on the seventh day. What he thought would be a short and simple journey, however, leads them deeper into the mountains—and Oria deeper into the thrall of foul magic. Until he must choose between two terrible paths.

A Heart-Wrenching Choice
Struggling with conflicting loyalties, Oria and Lonen fight to find a way to be together… lest they be separated forever, and their realms go down in flames with them.


If you haven't started this amazing series yet, pick up Book 1, LONEN'S WAR today!