My Precious: Which Original Character is My Favorite? 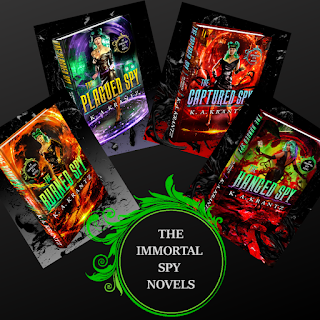 Which character of mine is my favorite? You might think it's one of my protags since they're the stars of their respective series. I like 'em a lot, I do. Is either of them my favorite? Does either of them make me smile whenever they're on page? Does either of them warm a little spot in my black heart regardless of what I'm putting them through? Nah. That honor goes to one character. He's not always on page. He's rarely the star of a scene; yet whenever he's involved, he somehow manages to steal the spotlight.


Gurp the Goblin from the Immortal Spy series.

Loyal sidekick to the commander of the Berserker battalion. Majordomo of the compound. Architect, engineer, logistics coordinator, home designer, living forensics lab, and bottomless trashcan. His favorite snacks are explosives, preferably dragon-made grenades. English isn't his first language nor is it the one with which he is most comfortable, but he does his best to speak it in order to be inclusive. He's a caretaker who knows one's needs better than the person in need, and he doesn't exploit that knowledge. No. He simply delivers, sometimes with subtlety and sometimes with great aplomb. He's a friend to outcasts and orphans. He's pure heart and endless compassion despite a society that reviles him due to his race. He's not a looker by common standards with his mottled greenish-brown skin, potbelly, and large wart upon his bulbous nose. His flatulence can outstink a terrified skunk. Oh, but there is no one more beautiful in intention and deed. He's not ashamed to be afraid, which makes his acts of bravery even more commendable. He both fears and adores the protagonist of the series...

I could go on and on about my favorite character, but I have a chapter to write, one in which Gurp makes an appearance. Now you know how much I enjoy writing those scenes.