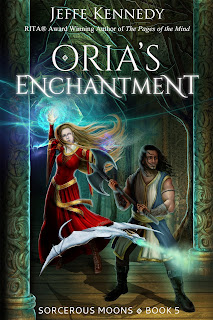 Our topic at the SFF Seven this week is "If you were going to write fan fiction, what show/characters/etc would you write?"

Now, I'm not an author who got her start by writing fan fiction. I totally respect that many writers developed their chops that way, but it frankly never occurred to me to do that. I fantasized plenty about the books I read, made up stories in those worlds where I got to be the hero - but I never thought to write them down. It seemed wrong to me.

The intervening years have seen a huge growth in the world of fan-fiction writing, and a legitimizing of it. Still, I've never done it and don't think I ever would.

In my Sorcerous Moons series, I gave my heroine a winged white lizard Familiar, who breathes fire and communicates with her telepathically. This is totally my version of Anne McCaffrey's fire lizards and dragons from her Pern books - one of my favorite daydream subjects.

So ... maybe the line between homage and fan fiction is a fine and narrow one. But it's an apropos topic for me, because ORIA'S ENCHANTMENT, book #5 in the Sorcerous Moons series, just released. Buy links are going live as I type this, but you can find them here as they're available.

The Temptation of Power
No longer a princess and not yet a queen, the sorceress Oria welcomes the rush of power the ancient mask brings her—though the obsessive connection to it frightens her and alarms her barbarian husband, Lonen. But retreat is not an option. She must wrestle the magic to prevent an annihilating war, even if she must make the ultimate sacrifice.
A World in Flames
If Lonen wants to reclaim his throne—and save his people from destruction—he must return by sunset on the seventh day. What he thought would be a short and simple journey, however, leads them deeper into the mountains—and Oria deeper into the thrall of foul magic. Until he must choose between two terrible paths.
A Heart-Wrenching Choice
Struggling with conflicting loyalties, Oria and Lonen fight to find a way to be together…
lest they be separated forever, and their realms go down in flames with them.