7 Things to Avoid When Trying to Meet a Writing Deadline

The topic for the week: Seven Deadly Sins: the list of things you MUST avoid if you want to finish a project on time…

My fellow SFF7 authors have written a series of fun and useful and deeply felt posts on the subject this week!

I don’t really have deadlines for my novels, since I’m independently published. I have exactly one hard and fast deadline each year for getting a polished, edited, complete story turned in and that’s August 1, for our Pets In Space anthology. Otherwise it’s really just about me having a desire to release a new book in a certain month and trying to work steadily toward that self-imposed goal.

The common folk wisdom for assignments of this type is to list the things that come to mind first so here’s what I’ve got for you:
AVOID:
Too much time on social media – it’s so easy to get sucked into the latest drama on Facebook or twitter or wherever you like to hang out. Or to enjoy cat memes …. The time flies….

Comparing yourself to other authors – don’t get paralyzed to even touch the keyboard because you know you can’t write 10,000 words a day like Name Author XYZ says she does, so what’s the point in you struggling??? Umm, the point is, you’re YOU and you write at your speed and even one word a day adds up to a novel at some point.

Worrying whether you’re writing the book at the right time – who the heck knows what will be hot by the time you hit publish (or your publisher does if you go traditional or hybrid). And maybe you’ll be the new trendsetter the rest of us ooh and ahh over! So keep writing.

Chasing the shinier object – unless you know for sure your successful process is to work on many projects at once (and some people do), avoid the temptation to abandon your WIP to go off and start another WIP on some bright new idea that just came to you in the shower or on the drive home. Now obviously there are times when plot lightning STRIKES you and the new idea genuinely is what you need to be writing. In those cases, trust yourself and your Muse and scribble those words as fast as you can because this will be gold. This suggestion does conflict with the part of our topic today that frets over finishing a project “on time”. But in general, keep a notebook or file of the new shiny plot ideas for later and keep going with the current WIP.

Losing your file – BACK IT UP. I learned this the hard way a long time ago when I lost an entire, completed 100K novel. Luckily at the time I was on a huge software project at the day job with some of the best software guys in the business and one of them took pity on me and recovered the file in about 5 minutes from some dusty buggy back alley on the personal computer I had then. The formatting was messed up but I could fix that…

Losing yourself in the research – I adore doing research. I have an entire library of scholarly tomes on ancient Egypt and I can happily spend a lot of time researching abstruse topics like tax liabilities of the temple of Amun in Thebes in 1500 BCE. But I’m only going to insert about one sentence of all the great cool stuff I found along the way into the novel…so you have to make your research forays self-limiting.  Google is your frenemy in this regard, helping you find information but dangling other enticing avenues to also explore. Find the answer or the detail you need and hasten back to the WIP.

Failing to safeguard your health – human beings tend to have confidence they can power through anything. Beware of ergonomic repetitive stress injuries, as well as other emotional burnout hazards lurking. TAKE CARE OF YOURSELF FIRST.

A word about negotiation...

I spent a long time at the day job involved with massive government subcontracts for flight hardware. (Think Mars rovers and other complicated spacecraft.) Yes, there were absolute launch windows that had to be met – the planet Mars would only be in the right place every two years for a brief span of days – but these gigantic Project schedules had slack time built into them because stuff happens.

And at the worst? A launch might need to be delayed two years. Or longer.  Which is pretty bad. But no one dies. We were not living in the movie “The Martian” with an astronaut stranded on Mars growing potatoes. Neither are you.

The part that’s relevant here is we expected our suppliers and partners to keep us apprised of emerging difficulties and challenges well in advance and there were contingency plans on our end of the project.

Even if you have a contract with a publisher and an iron clad delivery date in writing, stuff happens in the life of a human being. Tell your publisher if you’re struggling or if you’ve got family issues or health issues or whatever. (Work with your agent if you have one.) Negotiate a new due date.

Don’t wait till the due date to do this.

Not to downgrade the importance and significance of the publication of your book but the world will not end if it doesn’t go out on a certain date. No one dies.

I understand disappointment and frustration will ensue and there may be problems for you going forward, in terms of your relationship with the publisher and their trust level with you if the situation happens more than once.

Worst case? Maybe the publisher does cancel the contract entirely, although as a negotiator, I’d be amazed if they wouldn’t work with you at least somewhat before taking that drastic step. In this day and age, you can always self-publish when the book is ready.

But if you owe someone a book for whatever reason and are going to miss that due date, and there’s a serious issue for you in meeting the due date, open communications and negotiate.

But take care of yourself. 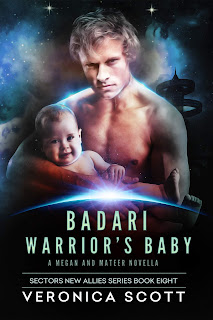 The blurb:
Dr. Megan Garrison, mate to the Badari Warrior pack’s senior enforcer Mateer, is perilously close to the due date of their baby when she’s kidnapped by human malcontents in Sanctuary Valley. The kidnappers threaten to harm her and intend to ransom the half human-half Badari child to the evil Khagrish scientists in return for their own lives.
Mateer and his fellow Badari launch a desperate effort to save his mate and child but the situation is made more complicated as Megan goes into labor. Can they rescue her in time to save mother and child?

Genetically engineered soldiers of the far future, the Badari were created by alien enemies to fight humans. But then the scientists kidnapped an entire human colony from the Sectors to use as subjects in twisted experiments…the Badari and the humans made common cause, rebelled and escaped the labs. Now they live side by side in a sanctuary valley protected by a powerful Artificial Intelligence, and wage unceasing war on the aliens.

This is the ninth book in the Badari Warriors world (and the eighth book in the numbered series) and each novel has a satisfying Happy for Now ending for the hero and heroine, not a cliffhanger. Some overarching issues do remain unresolved in each book since this is an ongoing series but romance always wins the day in my novels!