On My Mind: Concept Fermentation 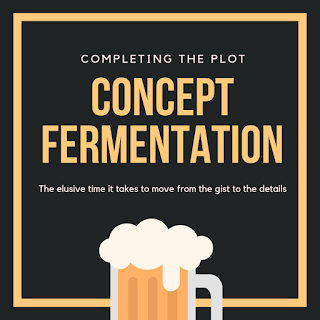 On my mind this week is the time an idea needs to stew before it is ready to become a compelling story. It's such an ambiguous yet necessary part of my process that refuses to be predictable or rushed. The most recent books in my Immortal Spy series I attempted to write on a schedule that allowed two weeks for concept fermentation. Two weeks. That should've been enough, right? Plenty of time for pondering and playing what-if. I already had the top-level concepts for all books in the series long before I released the first book.


So why wasn't two weeks enough to hash out a story?

Yet two weeks wasn't even close to enough time. We're talking months before the concepts really blossomed into something that resembled a layered plot that could carry a novel. Thank the Powers That Be that I'm not contractually obligated to deliver a completed book to a publisher on a set date; I'd be royally screwed. I'd be in breach, and I'd be persona non grata in the industry (deservedly so). As it is, I've earned no fair regard from my readers for the delay, which I truly regret.

Just this past week, the fog surrounding the fifth and sixth books finally faded. I'm 85% clear on how the characters will develop, what specific challenges they will fail and what challenges they'll ace, who will bear the brunt of which consequences and how that will manifest. I'm also clear on which tertiary characters will move them from beginning to end and which open threads from the previous books will be resolved as the series approaches the seventh and final book.

I have thirteen (incomplete) versions of the current WiP saved; thirteen versions of a story I tried to force into existence. Thirteen versions that petered out in the second arc because the concept wasn't fully baked. I tried to "write my way to right," to stimulate my imagination to conceive on the fly, to convince myself that what I had was workable, redeemable, fixable in edits, [insert platitude here]. I have months of arguably wasted effort sitting on my hard drive as some sort reassurance that because I wrote something I'm still working, I'm still a writer.

Being the sort of person who likes a plan and who thrives on ticking checkboxes on a list as a means of reinforcing my personal discipline, I find the unpredictability of how long it will take for a concept to fully ferment utterly aggravating. Once the story becomes clear, once I have jotted down all the pertinent points from beginning to end and completed something vaguely resembling an outline, I celebrate. I celebrate more at that moment than I do upon releasing the book.

Yes, I'm aware everybody has their own process, their own schedule, and their own methods of making it to The End. Yes, for this reason and so many others, it's sage advice to not compare your process or yourself to others as means of measuring success in a creative field. Still, I could do without the frustrations of waiting on a concept to fully ferment.

Email ThisBlogThis!Share to TwitterShare to FacebookShare to Pinterest
Labels: craft, Detangling, KAK, On My Mind, Series