Adverbs Are Your Friends (Damnit) 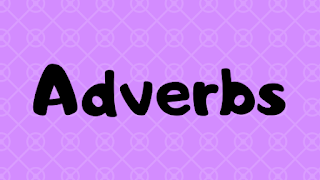 Oh, The Rules of Writing, or How To Appease Your MFA Professor. ~snicker~ There are many rules of grammar with which the ardent pedant will attempt to flog a novelist; however, we wield the mighty shield of Creative License. Genre authors, in particular, have a field day running riot over the grammar police who are armed with a Stunk & White from 1918 while the rules have evolved with the language over the last century. ~Dangling Prepositions in Infinitive Phrases, it's you I'm looking at.~

Grammar rules, however, are only one part of the Writers Rules penned by ~queue Elgar's Pomp & Circumstance~ Every Author Who Has Gone Before. ~record scratch~ The more famous the author, the more likely they've written a book on HOW TO WRITE GOOD [sic]. Psychophants pluck choice soundbites, etch them into tablets, post them to webinars, and tout them at conferences as THE RULES OF WRITING--FLOUT AT YOUR OWN UNPUBLISHED PERIL.

Steven King, in On Writing, famously wrote, "The road to hell is paved with adverbs, and I will shout it from the rooftops." As a result, novelists, poets, and lyricists eschew the helpful adverb...or, rather, they try. In some child-like skirting of the NEW RULE, they dropped the "ly" from adverbs that answer the question "how" in an attempt to disguise it as an adjective; thus giving rise to the issues of "bad vs badly," "slow vs slowly," "soft vs softly" etc.

Dear readers, it's not pedantry to insist that adverbs be embraced for what they are:


Adverbs are modifiers of verbs, adjectives, or other adverbs that answer the questions when, where, how, how much, how long, or how often.

How badly do I wish writers would embrace a necessary adverb? Occasionally, I will boldly deface a book to fix that shit. I frequently will proudly scream the corrected lyric in the middle of rush-hour traffic with all the windows down. Yes, I usually will go so far as to petulantly refuse to buy a product if its advert castrates an adverb.

As in all things, moderation is recommended. An absolute erasure is not.


Don't fear the adverb. It is your friend.