Gravedigging: a Peek at Something No One Has Ever Seen 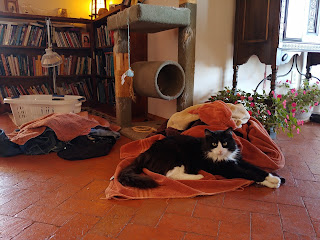 Our topic at the SFF Seven this week is Gravedigging: Share Something Great from a Dead Project.

While intriguing, this is also a tall order. I mean, for me, very few (if any?) projects are truly dead. Though I suppose zombie works also qualify for this spooky theme. Also, if there's something Great in it, then the projects is almost certainly not dead. The truly dead projects are those that have nothing redeemable in them.

Also, this topic seriously took me down a rabbit hole of looking at old fragments of stories and various projects that languished for one reason or another - some going back twenty-five years to when I was first rooting around and finding my voice as a writer.

But here's a little something that's kind of been hanging around in the Undead Files. I wrote it down in part to capture a certain feel. It came from a dream when I was immersed in other projects and couldn't devote time to this. Turns out that was ten years ago! I could've sworn it was only a couple. Alas.

Anyway, it's rough - the names are placeholders - but I still see the shine in it.


For the first time, she let others into her private space.
Except for the Prince and that didn’t seem the same at all.
“Whoa,” said Johnny. “That’s an amazing tent. Patio. Pergola-type structure.”
“Yes, well, I wanted to be able to sit outside, but I needed a shield from the glare of the sun. I thought a little awning would do, but you know how things are when someone like the Prince gets involved.” She waved her hand vaguely at the elaborate patio cover, by way of explanation.
Several chairs were scattered about on the polished stones. Flat and gleaming like marble, the stones fit against one another with gorgeous precision, emerald greens glowed against amethyst against ruby. It was like a dance floor of precious gems.
Overhead, a fanciful structure of soaring spires and beams supported drapes of silk. They fluttered in the light breeze and filtered the sun into a softer rainbow from above. The chairs looked like they were woven from white vines. Several were upright, while others would allow various reclining positions. Another sat before a desk that seemed to be carved from a single piece of topaz, as improbable as that might be.
It was literally a jewel. Catching the light and throwing it back enhanced and warmed. There even seemed to be a quiet sun at the heart of it.
The foreign woman caught Bizzy’s absorption with the desk.
“A little much, isn’t it? When I said I wanted to be able to work outside, he took it to a serious extreme.”
“Who are you?” Bizzy asked before she could help herself. Johnny stepped quickly to her and draped a heavy arm over her shoulders. He wasn’t happy with her. He didn’t want her jeopardizing his first real opportunity to get to know the woman better. Though, if the Prince, himself, was courting her, poor Johnny never stood a chance.


“She doesn’t mean it,” Johnny was saying. “She’s just easily…” he looked around the confection of a courtyard, “dazzled.”