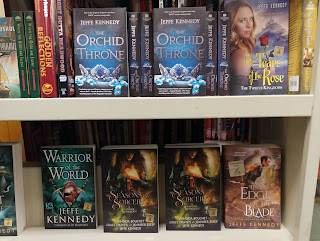 I did a book launch signing yesterday for THE ORCHID THRONE, along with Jane Linskold. So lovely to see that my local indie bookstore, Page 1 Books, has such an array of my books!

It was a fun event and I so appreciate all the folks who took the time to come out.

Our topic at the SFF Seven this week is Writing Fight Scenes. Now, I - somewhat famously, if I want to give myself that much credit - don't like writing fight scenes. I'm really not much for violence overall. I'm that person who covers her ears and shuts her eyes at the scary part in the movie. The fight scenes - especially those extended mano a mano duels that seem to take up the last twenty minutes of every action movie - bore me to death.

I've even been on panels - like one Jennifer Estep put together for RT one year - on Steam vs. Scream: writing sex scenes or writing fight scenes? Spoiler: I'm the sex scene gal.

I love writing sex scenes. They come easily [heh] for me. I love the way the intimacy and power of sex peels open the characters and can drive transformation. People try to tell me that fight scenes do the same thing and my frank opinion is that they're wrong. Fight scenes can reveal character - and should, if well done - and a fight scene can challenge a character, but overall I think that fight scenes drive plot.

So, this makes sense to me, that character-driven writers like myself tend to prefer sex scenes - or any scene delving into emotional intimacy - where plot-driven writers love fight scenes. Marcella Burnard, our Gal Friday here on the blog, is forever claiming that explosions are perfectly valid plot points. I'm sure she's right - they just aren't for me.

I titled this post "Fight Scenes for Peace Lovers" and that's probably not fair. I know plenty of writers who create horrifying fight scenes while being perfectly calm, lovely and peaceable people in real life.

But what do you do when, like me, you're someone who abhors conflict and finds fight scenes (and I'm including battle scenes in this) tedious at best? When all I really care about is who wins and what kind of damage the participants suffer going forward.

I can personally vouch that treating them like sex scenes, only with fighting instead of loving, DOES NOT WORK.

You know what worked for me? Layering.

I write the bare bones of the fight scene to get it in the story, then I go back and add to it. The major battle scene in book 2 of Forgotten Empires, THE FIERY CROWN (cover reveal coming October 16 on Tor.com!), I revised and layered in more and more detail probably a dozen times. On each pass, I was able to take more time to add to the visceral experience of the battle, to slow things down. This really helped me get past the "Joe and Susan duke it out. Joe gets a gut wound. Susan wins." mentality.

Giving myself permission to revisit the scene multiple times and layer in information really made a difference for this Steam writer. I'm sure our Scream writers here at the SFF Seven will have more advice. I know I'll be reading.