Research Was My Key to Writing the Fight Scenes 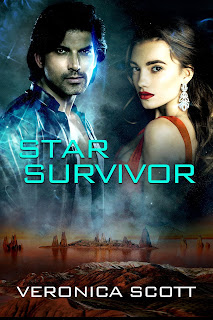 Our topic this week is writing fight scenes. My primary genre is science fiction romance and I’m mostly of the fighting-with-blasters school, or ships doing battle in space, rather than hand to hand combat, although my characters do get into some of that.

I’ll focus on one example of how I prepared to write the climactic battle in Star Survivor, where the hero, Khevan, is seeking to leave the D’nvannae Order to save his beloved’s life and to be free to have a future with her. The D’nvannae serve an alien goddess and are assassins or bodyguards depending on her whims.

I decided getting out of this religious order would end in hand to hand combat (there were other challenges in earlier rounds of this ritual), first with hand to hand combat and then with knives. I’m an ordinary housewife, who had one four hour self-defense class in college and thankfully no experience in fighting for my life except in nightmares but I wanted these scenes to ‘feel right’ to readers.

So I turned to youtube, where there are literally thousands of videos explaining techniques and tips for all kinds of scenarios. I concentrated on videos by former Special Forces operators, Krav Maga experts and the like and I started with very basic instructions. I took some notes as I went, of useful tips, positions, blows…I watched quite a few hours of this, immersing myself.  I not only made notes of the suggestions from the various instructors but also of how the movements unfolded in the mock combat encounters they demonstrated. 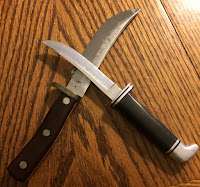 I inherited two hunting knives, one from my late father and the other from my late husband and I got those out and (very carefully) practiced some of the “do this”, “don’t do this” holds and movements to get the feel for the weapons as best I could. Any muscle memory I built up or any strategy I acquired during all this research has long since left me, especially because I never practiced opposite a real person, nor did I really train with a lot of repetition.

In the end I wrote a fight scene I was proud of, based on all the research and my synthesized view of what I'd learned. In earlier posts this week other authors discussed how their character focused on his or her adversaries during the fight, or how others were faring in the battle, but I wasn’t writing from Khevan’s POV here. The important character was Twilka, the woman he loves and her reactions. Here’s a portion of the scene:

Twilka gasped as the two men begin circling each other in a deadly ceremonial dance with precise steps, sizing each other up, jabbing and moving away with amazing speed. The sheer fluidity of the moves inspired awe. Constantly in motion, constantly testing each other. Both were protecting their ribs as much as possible and using the strength of their entire bodies as power behind the blows, especially those made with the legs. Khevan drew first blood, launching a kick whose impact rocked Harbin, although he fell away from the ferocity of the blow, somersaulted, and rose to retaliate with his own.

Khevan parried, slipping aside as Harbin’s flurry of strikes came at him, then grabbing his opponent and throwing him to the surface. Quick as a snake, Harbin whipped his legs and, even though Khevan danced aside, he fell as Harbin managed to trip him. Springing to his feet before his opponent could capitalize on the momentary weakness, Khevan settled into his fighting stance again. The two men danced around each other before Harbin struck. The next set of blows came, each man striking, bobbing and weaving so fast Twilka’s head spun.

Harbin feinted and landed a solid blow on Khevan’s left ribcage. Although the impact looked and sounded terrifying to Twilka, Khevan danced away. The men engaged again in another sequence of blows. Khevan managed to catch the final strike and land his own blow at Harbin’s neck, although partially blocked, and followed with a three punch combination. Clearly, the Red Lady’s champion was shaken, dropping to one knee.

Twilka recognized Khevan’s red handled, golden-bladed knives as the weapons materialized on the platform. Another set, which Harbin grabbed, cockily tossing one in the air and snatching it as it fell, were equally menacing. Khevan advanced on Harbin immediately, driving the other man toward the red line. He drew first blood, scoring a long slash across Harbin’s ribcage before his enemy mounted a belated defense and deflected the follow-up blow.

Twilka swallowed hard as the combat continued, the flurry of blows too fast to follow. After one encounter, blood flowed freely in a scarlet ribbon down Khevan’s side, and she realized Harbin must have penetrated his defenses at least once. Harbin appeared to her to be on the defensive, mostly using his weapons to keep Khevan from scoring hits, while getting in very few stabs or slashes of his own. Harbin’s features were set in a look of intense concentration, eyes narrowed, teeth clenched. Sweat glistened on his face and torso. Khevan’s face was serene and confident, his gaze locked onto Harbin as if assessing the other man and finding him sadly lacking. There was no denying the amount of energy this death match was consuming, but Khevan moved as fluidly as ever, showing no sign of weariness. Twilka herself was tense, body taut as a bowstring, hands fisted as she watched her lover fight for both of their lives.

Khevan danced in close and used the butt of one knife as an impact weapon, landing a blow to Harbin’s chin and stabbing him with the blade in the other hand. Harbin retreated to the far end of the rectangle, Khevan following, constantly jabbing and attacking, aiming at different parts of his opponent’s body. As the match went on, Twilka admired the way Khevan stayed in control, moving in sync with Harbin, who was clearly beginning to panic as he realized how overmatched he was.

Khevan was going to drive Harbin out of the rectangle and win without the necessity for killing the man in front of her. Twilka began to relax as the outcome of his strategy became obvious to her. He was within seconds of securing the victory when the Lady’s command and the sound of the gong startled her.
“Stand down!”

As the sound of the gong reverberated, Khevan took a final slash, aiming at Harbin’s neck. His opponent fell in a heap, one hand falling outside the red rectangle.

“I claim the victory,” Khevan said, wheeling to face the Lady. “I’ve won my freedom.”

VS: But the goddess basically says “Not so fast”….

The blurb: The survivors of a terrible wreck meet again—but this time only one can survive.
The long-awaited sequel to The Wreck of the Nebula Dream… 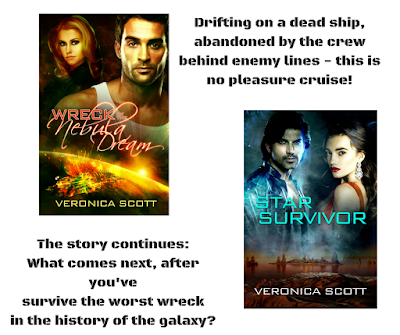