Which artists move me varies by the day. Sometimes by the hour. Music is the most obvious and the easiest because I can pipe it directly into my skull from just about anywhere. Right now, Spotify's Nine Inch Nails play list (built for me based on my listening habits - well trained AI is all that, lemme tell you) is keeping me going.

I have no idea what it is about driving beats and angry lyrics that work for me. But here I am. Maybe because the pace is fast and I get pushed to keep up. I don't have as much room to stop and overthink.

On the other hand, I have an app called Calm. It is a meditation app at core, but for me, the greatest utility is the sleep function. The app commissions a bunch of different artists to create content for the app - all centered around focus and relaxation. My two favorite are Liminal Sleep by Sigur Rós and System Sounds: Song of the Night Sky. The last one assigns a musical note to the stars in the night sky based on color and brightness then plays the results based on the stars rising at the eastern horizon. So you know that's right up my alley.

The other artists in my life are the felines. After all. It was Leonardo da Vinci who said The smallest feline is a masterpiece. Cuillean agrees. 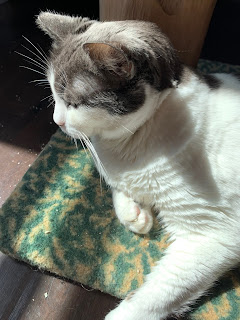