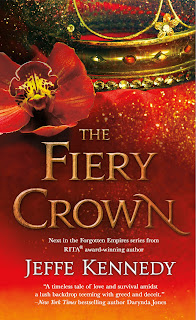 This week at the SFF Seven, we're asking: Presidential or Kingly - How do you decide your world's structure of authority and/or governance?

It's funny... as a staunch believer in democracy, I've never considered making one of my fantasy worlds have a government elected by the people. Why is that???

I mean, the easy answer is that it never occurred to me, but then I need to examine my underlying assumptions.


There's also the aspect of creating a political system where a government could be chosen by the people, which assumes a certain level of tech - or a very small population. Still, I could do it. I probably should - and now it's in my head, so that will probably brew up at at some point into something...

All that said, I do love writing about people born to the throne, taking up the noble cause and trying to do the right thing by their people. Interestingly enough, I take this to another level in my Forgotten Empires trilogy, amping up the theme in book #2, THE FIERY CROWN, where the nobility is magically tied to the land. It's an old, even pagan concept, and fun to explore.

Next up: a magical democracy? Hmm....