Working Hard Not To Be Repetitious As An Author

Our topic this week is what do we find ourselves doing over and over in our writing, like the way events unfolded repeatedly in the movie “Groundhog Day.”

First, I have to take a minute to say how much I LOVE that movie and also the commercial Bill Murray did for this year’s Superbowl wherein he revisited the adventure! Great stuff.

The movie “Edge of Tomorrow” with Tom Cruise and Emily Blunt is another terrific science fiction movie with the “repeat the day” trope and deadly stakes, by the way.

Moving on to my own writing, as others have said this week, I have a list of words I overuse in the first drafts of my books, which starts with the word “that’. That is my single most overused assembly of vowels and consonants, usually with over 200 occurrences in a manuscript. Another word on my list is “moment”, which ironically was suggested to me by my editor at Carina Press in my first book and I got so overenthusiastic about using it, my current editor now has forbidden me to use it at all. (The word does sneak in a few times each book though.)  I don’t self-edit when I’m writing the first draft because I’ve found if I do, my creativity is stifled and grinds to a halt.  First draft for me is all about letting the story spill from my mind onto the page (computer) and not the time to stop and exorcise the ‘bad’ words.

I budget three solid days for the editing pass in which I do go through and clean out and replace ‘that’ and all his or her repetitious companions on my list. It’s kind of grueling but yields so many more interesting word choices and turns of phrase so the effort is definitely worth it. I know there are programs which are supposed to assist an author in finding and changing out these types of words but I prefer to do it by hand, at ground level, myself. Sometimes during this part of the process, I find some other word I’ve formed a temporary attachment to and then I work on revising there as well. I don’t try to eliminate every instance of these words – they’re English, they appear naturally in life and in conversation. I just try to prune so there aren’t say three ‘moments’ in one paragraph.

I have a very successful, award winning scifi romance series going, the Badari Warriors, and I have a different challenge there, not to basically re-tell the same story in each book.

Here’s the high level series premise:  Genetically engineered soldiers of the far future, the Badari were created by alien enemies to fight humans. But then the scientists kidnapped an entire human colony from the Sectors to use as subjects in twisted experiments…the Badari and the humans made common cause, rebelled and escaped the labs. Now they live side by side in a sanctuary valley protected by a powerful Artificial Intelligence, and wage unceasing war on the aliens.

I have read series in the past where the author basically changes the names from book to book but everything else is the same, like old TV shows which followed a pretty strict formula. (Dare I say ‘cookie cutter’???)  I want to avoid that at all costs – I never want to bore the reader! 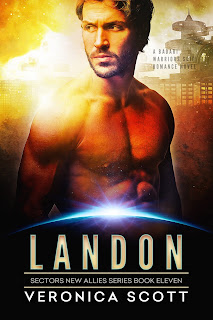 Just last week I had a really nice note from a reader who finished my newest book in the series, LANDON, and she in fact complimented me on the fact that I’ve managed to change up the circumstances in each book and provide new challenges for each couple, while remaining within the series world building.

Here’s what I said at one time about what I did to make the second book MATEER different from the first book AYDARR: With MATEER, I wanted to keep the series arc moving forward, advancing the overall plot, but I wasn’t done with the idea of a Badari warrior trapped in a lab and the human woman who helps him. There’s such a huge story potential inherent in the situation, which seems hopeless at first glance, but the hero and heroine will find a way out (this is romance – happy endings!).  I pondered how Megan, a doctor, would react to being awakened and finding herself a prisoner under threat of really despicable alien experiments – she’d naturally want to use her medical skills to help her fellow humans survive, but not get drawn into offering the enemy even the slightest assistance. And then there’s Mateer, the chief enforcer from the Badari pack, who’s been recaptured, much to the glee of the scientist running the lab. He has plans for Mateer and Megan together.

So while the two are mutually attracted to each other, they feel they have to resist the scientist’s plot designed specifically for them…and then something happens to Megan to totally change up the situation. 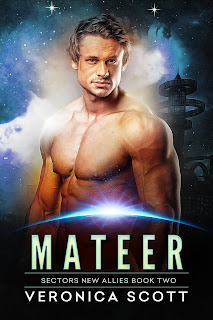 I think my biggest challenge for this book in the series was to make Mateer his own man, differentiated from Aydarr, the Alpha in book one. I had to sit and ponder how growing up in the same harsh circumstances as every other Badari would result in his being a unique person, with his own take on life. I also had a bit of fun in the beginning as Mateer envies the Alpha and his mate (from AYDARR’s events), and has confusion about how the whole concept of finding and being a mate works.  Not, mind you, the physical aspects, but how to know he’s met the one woman for him and how to impress on her that he’s the one man for her.

With Megan, who is the sister of book one’s heroine, but very different – younger, a doctor rather than a soldier as Jill was - I felt her medical training and knowledge would make her much more cautious about trusting her feelings in the high pressure environment of the Khagrish lab/prison.

I’ve played with many wrinkles and scenarios since the first two books, had a lot of fun, built the readership for the series and there’s no end to the stories I have in mind to tell going forward. So I guess this is my anti-groundhog day effort. I take it as a fun challenge and it’s also allowed me to explore a number of different SFR tropes within the series.

DARIK is probably the one where I had the most SF fun, giving a nod to the movies ‘Alien’, ‘Andromeda Strain’ and ‘Puppet Masters’ (the Heinlein classic, not the horror film franchise) in the course of the book. I’ve had hurricanes, avalanches, hidden Alphas, aliens hunting the hero and hero across the plains… (The hunt is a trope that has been used successfully in movies like 2010’s ‘Predators’, one of my favorites, and also in a classic TV movie about a big game hunter turning on his guide while they were out in the desert, and hunting him. I think that one’s been remade two or three times!)….a pregnancy, kidnapping, a heroine who says no to her fated mate (temporarily – hey, this is romance after all and she had a good reason!) and many, many more plot twists and turns over the twelve books so far.

Before I slide into repeating myself here, time to end the Groundhog Day and get back to work on my next book in the series which, yes, will have some new and different plot twists!

Note: Graphics from DepositPhoto, book covers by Fiona Jayde
Posted by Veronica Scott at 12:00:00 AM