Galactic Civilization Hums Away in the Background in My Novels

This week at the SFF Seven, we're asking:  How do you decide your world's structure of authority and/or governance?

The first thing to remember about me is that I imprinted on Andre Norton at a very young age and when it comes to the kind of science fiction I wanted to write, that was very much the flavor. I’m always at the micro level, the personal level, the man and woman (and maybe some comrades) battling the odds, respecting each other as they move through the adversity and falling in love as the adventure gets resolved. That’s what I enjoy reading (Ms. Norton didn’t have enough romance for me but she wasn’t trying to write romance either.) It’s what my Muse or my creative mind or whatever you call it has served up since I started writing at the age of 7.

I’m not wildly interested in the macro level – the interstellar civilizations and the intricacies of governments, etc. I’ve read grand sweeping books which explore these themes…but it’s not me. And if there’s not a couple to care about (M/F, M/M/ F/F or any other love is love duo…on occasion a trio) I’m usually gone at hyperspeed.

I liked how Ms. Norton’s science fiction novels occurred in a galactic civilization that was never defined in too much detail but which seemed vaguely familiar to me.

To tie back to my blog post title, the government of the civilization hums away in the background and doesn't insert itselt into the stories in much detail.

When I established the Sectors in my world building, I very much went for that model. It’s like the science in my novels – I don’t bother explaining how the blasters work and I don’t bother explaining how the government of the Sectors operates. Any more than I deliver a mini lecture on how the State of California governs itself when I talk about living here and some cute thing my cat did. It just is and let’s get on with the adventure and the romance.

I guess if pressed, I’d tell you the Sectors is democratic (no, don’t ask me how that works across the galaxy) more or less, with bureaucracy and a functioning, ethical top notch military and an interstellar crime syndicate and all kinds of corporations of varying influence, Non Goverment Organizations; rich people (“Socialites” are usually their children), poor people and people in between…there’s also the Outlier Empire, which is sort of Tsarist Russian in the way it operates; the Hinterlands; the frontier; unaffiliated worlds and systems…lots of room for yours truly to play.

And we haven’t even discussed the other influences at work, like the Red Lady of D’nvannae, an ancient alien goddess who runs an order of assassins who can be bodyguards at her whim. Or her sister, the White Lady. Or the mysterious Mellureans…

(Waves hands although reader can’t see her.) It’s PEOPLE. Doing human things.
And some aliens and Others….

My characters may visit a world ruled by an emperor, as with Mission to Mahjundar, or be an undercover cop in the Sectors Criminal Investigation Agency (nope, not doing a spoiler and telling you who in which novel – sorry). It’s whatever the story needs, in the general worldbuilding of the Sectors, which frames it all for me.

But I think it’s all heavily influenced by the world in which I live.

My mind doesn’t run to outlining all the details of a government, whether it’s led by a king or a president or something/someone else. I build what I need for my story, or build out what’s already been done for the Sectors in earlier stories and thinking. I do stay consistent with myself.

I’m playing with a world ruled by an Alpha in my Badari Warriors. As I described it in the most recent release, the power to rule over all other Badari is buried in his DNA – these soldiers are genetically engineered but there’s a LOT of plot to this series. If/when these soldiers and their mates and allies manage to defeat the aliens who created them, and take the planet for themselves, he’ll be the unquestioned ruler. I’m enjoying playing within these boundaries and have already introduced some issues with the humans, who like to rule themselves, or at least to feel they could come to power someday. And unless you’re a Badari, it isn’t going to happen, not on this planet. So I’m having fun with all of it but this is on one specific planet, and they do hope to join the Sectors someday.

Now the ancient Egyptian books are a piece of cake, comparatively speaking because their civilization was so detailed. I have a Pharaoh and he has various officials to do his bidding, plus generals and high priests and priestesses…and the gods keep a mostly benevolent eye on all of it.

My fantasy world of Claddare has many parts and some are classic ‘kingdoms’ but others are clans or packs…I’m in a medieval mindset when I write those stories. 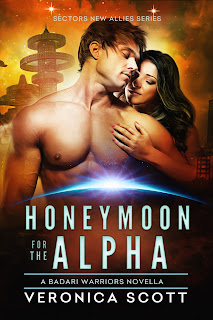 My new release HONEYMOON FOR THE ALPHA: A BADARI WARRIORS NOVELLA:

The blurb: Thrown together as helpless prisoners in the punishing conditions of a Khagrish lab, Jill and Aydarr fell in love. Claiming each other as mates despite only having one night alone in a cell, they formed a deep, loving mate bond.

Now, a planetary year later, after escaping the lab and leading the ongoing rebellion against the enemy together, Aydarr longs for more. He wants a chance to show Jill how much she means to him.

He decides to risk everything to take his mate away from it all for a few days. But will the Khagrish, the threats lurking in the planet’s unexplored wilderness and the Badari goddess allow them to complete A Honeymoon for the Alpha?