Ghost of the Nile - Something Different From the Backlist for Halloween 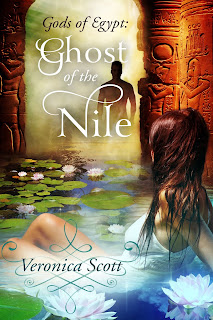 Happy Halloween! This week at the SFF Seven, we're talking about our choice of a backlist book!
In view of the holiday, I’m going to feature GHOST OF THE NILE (GODS OF EGYPT) because it’s a ghost story but it’s an unusual take on the subject…

Ghost of the Nile is one of the standalone stories in my “Gods of Egypt” paranormal series set in ancient Egypt. For quite a while I’d been fascinated with the idea of writing a story set on an estate in the 1550 BCE era. One of the interesting things about Egypt was that for literally hundreds of years the climate and the daily life stayed pretty much the same. Pharaohs came and went but the more ordinary folk had quite an unchanging routine, linked to the Nile’s floods. I felt my hero could return from the Afterlife and fit right into his old home, although as a guest, not a resident. I thought the challenges for him could be intriguing.

One of my favorite series of novels is The Chronicles of Brother Cadfael by Ellis Peters. All the action is set in a small English town circa 1100 CE (Common Era). I love being able to revisit the town and the people over and over. I was hoping I could do that for my readers with stories set on one ancient Egyptian estate. Ironically, I didn’t write that series yet.  But the ideas inspired my setting for Ghost.

The Egyptians of 3000 years ago believed that unless you were buried in the soil of Egypt and had all the proper rituals recited for you, as well as your name preserved, you couldn’t enter the Afterlife. So my hero Periseneb, who was murdered and didn’t receive the rites at the time of his death, has been condemned to roam the fringes of the Afterlife and wage endless battles against demons and giant snakes.

I’m always fascinated with the goddess Ma’at, who represented truth, balance, justice…and who happened to be the goddess of second chances. I’m a Libra myself – scales, balance…. She was one of the Judges who weighed the heart of a dead person, to see if they deserved the Afterlife. So I decided she’d need a champion to accomplish some task in Egypt, and selects Periseneb, who she believes deserves a second chance at entry to paradise. A favorite old movie of mine is the 1963 version of “Jason and the Argonauts”. I love how the goddess Hera tells Jason she’ll help him three times along the way. I decided Ma’at would help Periseneb, and you’ll see in the book how he has to call for her assistance.

The next intriguing concept this novel allowed me to play with was the ancient Egyptian idea of the terrifying nature of ghosts, or akhs. Periseneb himself is uncomfortable with being an akh returned to Egypt, and worries a lot about inadvertently loosing the evil powers he now possesses on the innocents around him.

And last but not least, there’s the terrifying goddess or demon Ammit the Destroyer, who was part lion, part hippo and part crocodile, and known as Devourer of the Dead. I’ve wanted to find a way to incorporate her into a novel in a meaningful way because she’s so intriguing.


So there you have my influences which blended together with romance and adventure, to yield my latest novel!

This was my favorite review, from the ladies at Dear Author:

“There’s Egypt and gods and magic and strong men and stronger women and love even beyond death and into the Afterlife. The historic details add spice throughout the story and these definitely aren’t 21st C people in linen kilts.”

Betrayed, murdered, and buried without proper ceremony, Egyptian warrior Periseneb is doomed to roam the gray deserts of the dead as a ghost for all eternity.

But then the goddess of truth offers him a bargain: return to the world of the living as her champion for 30 days. If he completes his mission, he’ll be guaranteed entry into Paradise. Periseneb agrees to the bargain but, when he returns to the living world, two hundred years have passed and nothing is quite as he expected.

Neithamun is a woman fighting to hang onto her family’s estate against an unscrupulous nobleman who desires the land as well as the lady. All seems lost until a mysterious yet appealing ex-soldier, Periseneb, appears out of nowhere to help her fight off the noble’s repeated attacks.

Meanwhile, Periseneb’s thirty days are rushing by, and he’s powerless against the growing attraction between himself and Neithamun. But their love can never be. For his Fate is to return to the Afterlife, and Death cannot wed with Life…

Note: This post first appeared on my own author blog.