When you don't have a backlist...you pick a fave! 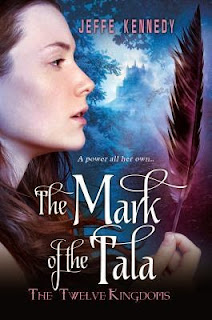 My frontlist is coming! Yeah, I know, publishing is one big sea of secrets that you can’t talk about…what a crock. But what that really means for this week’s blogpost is—I don’t have a backlist book to share…

Backlist [noun]: books available in print, but are not new releases

My goal, back when I was in the corporate world, was to have 10 backlist books before retiring from the lab to become a full-time author. Heh, chronic disease be damned, but it did give me the opportunity to jump right into stay-at-home writer!

*side note: I’d still suggest having some backlist books before diving into this full time…yikes!

But through it all I’m still reading! And so I’ve picked a backlist book from one of my favorite series to share with you today! I recently read THE FATE OF THE TALA and THE LOST PRINCESS RETURNS, so choosing the one that started it all seemed to fit.

Queen of the Unknown is the tagline and it absolutely fits THE MARK OF THE TALA. Andi, the middle daughter of the High King, is a bit odd and never feels like she fits in. Until she meets a strange man while out riding…and he becomes a crow. He opens her eyes to a hidden kingdom, one that she has claim to, and to the destruction her own father is wrecking on their world’s magic.

It’s full of shapeshifting, magic, political intrigue, romance, and a lesson of trust. It’s, IMO, the perfect backlist book because it opens up the world of the Tala and whew is it an entire world! And, if you’re a series devourer like me, you’ll be happy to know that Jeffe ties up all the plot lines and story arcs nicely in THE FATE OF THE TALA.

Do you have a backlist book, or one that you love? Let me know so I can check it out!

The Mark of the Tala

Queen Of The Unknown

The tales tell of three sisters, daughters of the high king. The eldest, a valiant warrior-woman, heir to the kingdom. The youngest, the sweet beauty with her Prince Charming. No one says much about the middle princess, Andromeda. Andi, the other one.

Andi doesn't mind being invisible. She enjoys the company of her horse more than court, and she has a way of blending into the shadows. Until the day she meets a strange man riding, who keeps company with wolves and ravens, who rules a land of shapeshifters and demons. A country she'd thought was no more than legend--until he claims her as its queen.

In a moment everything changes: Her father, the wise king, becomes a warlord, suspicious and strategic. Whispers call her dead mother a traitor and a witch. Andi doesn't know if her own instincts can be trusted, as visions appear to her and her body begins to rebel.

For Andi, the time to learn her true nature has come. . .