Not an Oops: My Little Backlist

I started working in publishing about the same time my husband started programming games. (We were babies.) Early on in a biz, you’re learning so much every day, and often we’d come home and exchange knowledge, kind of like kindergarteners bring home their “look what I did!” finger paintings. Most times, hubs was excited about my excitement, but when I started talking about the RR Bowker out-of-print lists — fondly called the “OOP lists”—he’d get this very confused expression on his face. Finally, I asked what was up with that, and he countered with a question: What do old books have to do with object-oriented programming? (Also OOP, apparently.)

This week on SFF Seven, we’re talking about our old stuff: out-of-print books, early books, backlist books. And since I’m sort of new to this whole authoring thing, I don’t have a whole lot to talk about. In an age of ebooks and long-term contracts, none of my books are out of print. Publishers have lots of fun tricks to retain rights long after the first blush has faded from a release.

In terms of backlist (that is, a book of mine that is not a new release), I guess the book I self-published last summer would count? It’s third in a series, but I challenge folks to read it as a stand-alone. I think/hope it holds up. The book is about a self-aware AI that, instead of deciding to nuke the world aka Skynet, really only wants to find a way to smooch her fella. Title is More Than Stardust, and it begins with a serious oops that has to do with neither publishing nor programming. 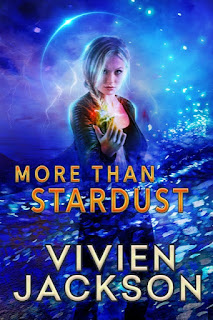