To NaNo or not to NaNo

Me: A dearth of cat pictures? No worry! I so got you.

Last week, I was outside in the early evening. This little cat darted out across the street right in front of me. I grabbed a can of cat food and the cat trap. She was hiding in bushes. To be certain she was still there, I popped the top on the can and set it down. As I stepped back, a tiny little cat crept out of the shrubs and began to eat. Back in I went. The cat darted into the bushes. I set up the trap with the can of cat food inside as the bait. I backed off across the street. My heart pounded too hard and too fast. I'd barely gotten my breath and started to get my head together when the trap went off.

Meet Peseshet. (Pe as in put, se as in set, shet as in Shetland) She's a sweet little thing with a lot of 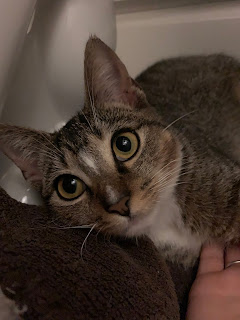 attitude. She's looking for her forever person in South Central Florida. Preferably, someone who won't throw her out like she doesn't matter the way her former people did.

Ah, November. Election day can't get here soon enough. Thanksgiving is too damned soon. I am not prepared. Above all, NANOWRIMO.

To Nano or not to nano. That is the question. Whether 'tis nobler in the mind to suffer the procrastination and avoidance of  -- wait. Didn't I do this last year? Pretty sure I pulled this. K.

Y'know, here's the long and short of it. Nanowrimo is a really great way to kick start yourself into writing as fast as you possibly can. There's power in Nanowrimo because you know you are taking part in something larger than yourself. The goal isn't to write well - it's to write fast. Writing well comes later. Nano is an amazing opportunity to give yourself the gift of suspending judgement simply because for thirty days, you and thousands and thousands of your peers are doing one thing - writing to 50k. It's thirty days were you can justify taking a little time to write while the rest of the family (generally) respects the effort because it's only for thirty days.

The downside? If you're someone who responds poorly to pressure, this will just block you. You have to know yourself, your process, and what drives you. If this sounds like you, stay far away. The other possibility is that you're someone who has far too strong a competitive streak, this could be a little toxic.

Understand. Nanowrimo isn't about 'winning' even though the whole process does have a finish line. You either make 50k+ words or you don't. But no matter where you land in word count over the month, you still win. You're farther ahead than when you undertook the exercise if it turns out to be right for you.