A movie with a shitty ending taught me to write. Yup. Historical. Ish. Adventure. Loads of fun right up to the end when the hero and heroine (after a convincing romance) intrinsically shake hands and say, "Right. Nice life then!" and toddle off their separate ways thus invalidating the entire prior two hours. Add into it that the heroine was a bit of a moron who couldn't fight her way out of a wet paper bag and you can already see where this is going to go, right? I was 12 and I was LIVID.

And *I* was going to fix it, by God. I did. Repeatedly. I spent that entire summer in my room with my mom's old Selectric typewriter set up on a TV dinner tray. No, I did not know how to type. I hunted and pecked my way into writing. The correction key didn't work because no one was going to buy correction ribbon for a kid with zero typing skill. We'd have had to have taken out stock in the company. So those old onion skin pages (which I still have) are a march of misspelled words, typos and carefully xxxxxxx'd out lines. I played and replayed the plot options in my head.

I could fix that ending.

NO. I could fix the entire affront! What if the heroine COULD fight? Wouldn't that be more fun?? Of course it would! Nobleman's daughter? Pff! PRINCESS. Who rides flawlessly. And handles a rapier better than anyone. Ever.

Yeah, I never finished that epic work. But it didn't matter. I'd always been addicted to stories. Books. Movies. TV shows. I think anyone who creates stories has to gorge on stories. We really are the monsters we write about - only we consume stories as fuel for our own. And for me, from that summer forth, I was lost. I wrote. And wrote. And learned. And read, and learned more. I wrote fan fiction during math class lectures when I should have been taking notes. Then I wanted to break my fan fic away into it's own thing with it's own identity. So I figured out how to do that during the most interminable year of social studies, ever. You'd think I'd have paid attention in English class. Until my mother shifted me up a grade level in the English department and the teachers had things to say I'd never heard before, that wasn't true. I spent my classes making stuff up on paper. Nooooo. There was no credit awarded for that activity.

But honestly. Approaching story after story after story time and a gain, learning to finish what I started, learning to take critique and learning to edit - those, for me, were things I could only absorb and assimilate by doing. So yes. I may have been kicked into the blackhole of writing by a movie with an unsatisfactory ending, but the fact remains. I learned to write by writing.

At least it's no longer a typewriter on a TV tray. 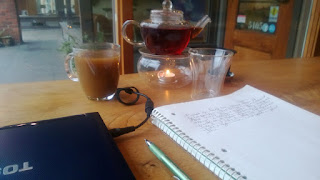 Email ThisBlogThis!Share to TwitterShare to FacebookShare to Pinterest
Labels: How I Learned to Write, Learning to Write, Marcella Burnard, Reading, Writing