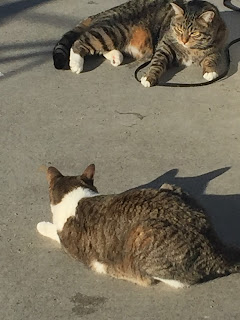 When two unrelated factions meet, the thing that keeps everyone alive to go home at the end of the day is politics. Unless you're George R. R. Martin.

Case in point: This photo is politics in action. Two felines, both alike in dignity, on the sunny dock, where we lay our scene. (With apologies to Shakespeare) Max (the boy facing the camera) is a neighbor who desperately wants to be accepted by my cats. He is particularly taken with Hatshepsut (foreground). She, being a decade older and wiser than he, has been known to shove him in the water. True story. This moment of détente brought to you by catnip. I'd make a joke about US politics needing some weed, but frankly, I think maybe anti-psychotics are called for at this point.

So there you have it. Do I include politics in my SFF? Absolutely. I contend that it's impossible to avoid

Humans are social animals, which naturally sort themselves into hierarchies as a matter of survival - this is the stuff hardwired into the oldest parts of our brains. When we were still cheetah-snacks wandering the savannahs, the social hierarchy determined who led a group. Who ate first. Who reproduced. Who lived. Who didn't. Jockeying for position within a given social structure is part of being human.

Since Science Fiction is as a genre, one big, open ended 'what comes next?' there's really no way to avoid politics. Which isn't to say that an authors personal political views ought to intrude. They shouldn't, however, I admit that my voice, my experiences and my world view are so colored by my beliefs/thoughts/ideals that I suspect it all bleeds through. If my characters hold political convictions, I want them to belong to those characters, not to me. I'm not writing to make my characters a megaphone for my own views.

That said. I have a fondness for shining light on certain marginalized populations. As a result, many of my characters hold alternative religious views, or are other-abled, or are non-hetero. In all those cases, there are politics surrounding the issues those characters face. And because I'm usually writing romance where HEAs are the expectation, my politics DO slip into the story - I'm going for acceptance and equality. Some days, like today, after more men were killed by police (and I freely admit I will never have the full story on those incidents, but the mounting death toll of young black men in this country is unacceptable) I wonder if inserting politics into writing isn't a duty - a way of saying something, as Elie Wiesel urged - a way of sounding the alarm at enough of a remove that the message of and for compassion slips in beneath a reader's skin and takes root.

I don't know yet how to respond to something that bothers me so deeply about my society. Maybe it requires someone more skilled than I. All I know is that I grew up on the golden-eyed optimism of Star Trek. Apparently, some of that optimism rubbed off on me. Because I do think politics end up in fiction anytime there's more than one character on a page. What I don't know is where the line in the sand lies. At what point does a socially conscious scifi story turn into a morality tale? I'd prefer to stand firmly on SFF side of that equation.