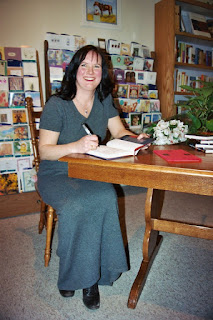 In honor of this week's topic -  a writing routine we used to depend on but changed and why - I dragged out this old photo of me at my very first book signing. That's January of 2004, when my essay collection, WYOMING TRUCKS, TRUE LOVE AND THE WEATHER CHANNEL, came out. I look so fresh-faced and excited. You can practically see the visions of sugarplums and lucrative multi-book contracts dancing in my head.

That was before I'd even contemplated writing a novel, or really much fiction at all. And I had lousy writing habits. Actually, I take that back. I had no writing habits. Sure, I'd gone to getting up very early (4 or 5 am) and writing before the day job in the morning. But, in order to coax myself into writing at all, I'd allowed myself to write whatever I wanted to. I don't regret this choice - because it did get me writing - but that's why I ended up with lots and lots of essays. Hey, I ended up with an essay collection published by a university press, so it wasn't a bad thing at all.

But I needed to do better, particularly when I tried writing longer works.

So I developed rituals. I had a dedicated writing desk. (By then I worked the day job from home and, while I had a single room for my office, I had plenty of room for two desks.) I played certain music (the soundtracks of The Mission and Master and Commander were my go-to's.) I did all sorts of things - read the (small-town, very thin) newspaper. I wore certain clothes for writing and others for the day job. A few other things I can't even remember.

You know what? Those things totally worked. I highly recommend establishing rituals, because all of those things, done stepwise, put my mind into the state where the words could flow. They served as a cue to do *that* kind of work.

But I don't do any of them anymore. I prefer silence when I write. I have only one desk - because we live in a much smaller house and I only have room for one. (I write full-time now, but as recently as last fall I was still doing the day job from home and I simply set up two monitors on the one desk. I read most of my news online, but only later, when it won't distract me from writing.

You know why I gave up all those rituals?

I didn't need them anymore.

I didn't even deliberately give them up. They just kind of ... fell by the wayside. As my writing habit became a firmly entrenched part of my day, I started forgetting about the rituals. I just dove straight into writing.

I suspect that's one way of knowing when you've got it down.