When Your Favorite MInor Character is Evil 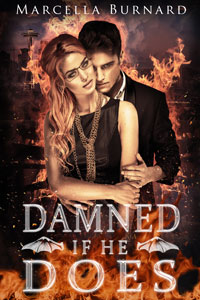 This releases next Tuesday. It's something a tad different from me. You can usually count on me to bring the grim and faintly creepy. Also, body count. Pretty much absent from this book.

It is possible that I attempted a bit of comedy. I'll leave that to you to decide whether or not I succeeded. This book has one of my favorite minor characters of all time - I wasn't supposed to like him. I didn't want to like him. But he is awfully charismatic in a way I hadn't expected. No. I am not talking about the heroine's cat. Of course I adore Archimedes.

In this case, my favorite minor character is Satan. Here's a bit of a scene he has with the heroine.

Fire surrounded her. Everything, even the rocks, burned. Flames circled the jagged black surface on which she stood. Obsidian stairs rose to a dais and a throne fashioned from burning, still living, still screaming, people.


“Welcome to my office.” Satan stood beside her, still in the human form he’d presented in the restaurant. “I see you’re indoctrinated well enough to expect the fire and brimstone motif. Trite but effective.”


Fiona quelled and her gaze ran away from him, too, only to find the damned souls being swarmed by serpents. The snakes buried fangs dripping with poison into the flesh of their victims. The wet, ripping sound reached her above the hiss and crackle of the flames.


“Ah, I see it in your face, the same look I see on the face of each soul who lands at the foot of my throne for the first time. Awareness that settles so rapidly into despair. Don’t make the mistake of thinking Hell is about despair,” the Devil said. His voice crashed down, crushing her beneath derision. “Despair is useless to me. Everyone adapts to it. I am about hope.”


He shifted, peeling back the illusion of civility. Of humanity. His skin reddened to crimson. His eyes turned black. No irises. No pupil. Just the endless depth of evil. He grew horns. A tail. A vicious, razor-toothed smile of triumph split his multi-planed face.


“I am the hope that sucks the marrow from your bones. The hope that shatters souls. I am every futile, dashed dream lying in broken-winged tatters at your feet,” he said, obscene relish in his tone.


Fiona snarled at the towering creature. “You’re the reason my mother couldn’t survive that heart attack?”


His laughter stoked the flames surrounding them higher. Screams shoved her to the ground, cowering with her hands over her ears while her skin charred and crisped. Her shriek mingled with the cries of the damned.


“Do you not pay attention?” he demanded. “No. Your pathetic mother’s death was never in my hands. But that tiny, flickering flame of hope that burned you to the ground before she died, that was me.


As you can see, Satan, in this book, has no issue with being bad. He actively enjoys it. He loves twisting everything he can get his hands on. And there's just something about that unabashed love of being evil that's appealing. Yet there's no danger that Satan would get his own book. He can't. Not the way the rules of the world work in this book. So he truly is a minor character who gets a few bits of stage time, and who cannot graduate to being the star of his own show. At least, not until he's ready to go to war with heaven again. And we all know how that ended last time.