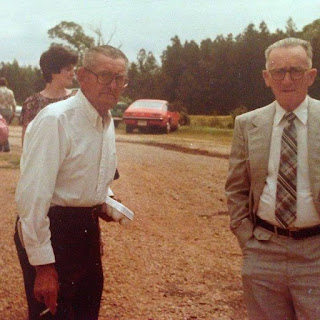 Because last week was the anniversary of my grandmother's death and because I am in nearing the end of a draft on a story set in New Orleans, I've got family on the brain. In part, because my mother's family is from the south. And in part because both in the story I'm finishing and in my life, family plays a complicated role.

This photo at right is of my grandfather Watson. He's the man on the right, in the suit and tie. This is in Arkansas, taken just after a church meeting. I have no notion of the year. Of all my family ties, my relationship with him was one of the least complicated. He and my grandmother both believed that my sister and I could do no wrong. We had an advantage, having both been born in Alaska, so far away form either set of grandparents. I met my maternal grandparents for the first time with I was five. I think they thought they had five years of spoiling to make up for. They were lovely people who accepted me without question and without fail, simply because I was their daughter's daughter.

But you know, they had six children. And those six children all had children. Some divorced, remarried and had still more children. By the time I'd come along, some of those children had married and started having children. That's a lot of people to have in the house at Thanksgiving. It's also a lot of people with a lot of different opinions, some diametrically opposed to my own. There are interdependencies and drama and accusations of terrible things. Dynamics of love and jealousy, rivalry and kinship are etched deep into the people who make up the family. We are mostly Scots/Irish and in the south, the clan identity never quite gave way. Your blood is your tribe for good or for ill. In reality, it's both. We have a body of stories in this part of my family - stories like Four Brothers Come to America and Marry Four Brothers. It was a headline in a local paper when a many times great grandfather arrived from Scotland. He and his brothers married four sisters whose last name was Brothers. When the Civil War came around, the entire line died out save for one lone boy who'd been too young to enlist. These make up a huge portion of our identity on Mom's side of the family. They're intertwined with the complicated side - like the occasional display of bigotry. I don't get to embrace one and ignore the other. They are part and messy parcel of the family.

And I'm not here to get up on a soapbox about anything. What I want is to have this complex, sometimes maddening, but ultimately loving and fertile ground woven into the story I'm finishing because it so defines the Southern experience and I suspect a big portion of the Civil War - in that it sundered families, both from an ideological stand point  and from the stand point that so many men died. The heroine of the story is already an orphan. She has no idea who she is. But she knows family. Crazy, maddening, loving and protective family. She'll do anything to protect them. Anything.