Who Would I Be? Torene of Pern! 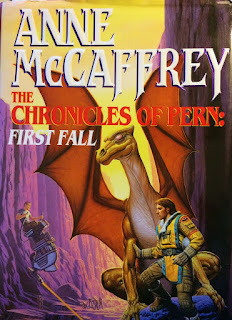 First of all, I have to say that I never want to be someone else, not even fictionally. Sure I'd like to have some attributes of the person - Lessa of Pern's ability to talk to all the dragons or Anna's Omega qualities or Ripley's sheer determination or Jepp's fighting skills - but I want to be ME, maybe in their world on my terms.

I am a character in my own Sectors scifi romance universe, one that's been mentioned but never actually met - yet. It amuses me to 'be there' myself, kind of behind the scenes. Of course the person isn't me...but it's who I'd choose to be if I woke up tomorrow in the Sectors.

Yes, SFF7 Saturday person is rebellious. But okay, after having considered this long and hard, and for this exercise only, I would want to be Torene, in Anne McCaffrey's short story 'The Second Weyr,' in The Chronicles of Pern: First Fall.

Sorka and Sean, the first ever dragonriders, still remembered Earth, and they were a bit constrained by the rules and traditions they'd set up in dealing with the discovery of Thread, and learning to fight it using the dragons. Torene was the first Millennial, to use a current analogy, born on Pern and ready to break out, set up her own Weyr, enhance and enlarge on what Sean had created...and do her own thing, based on what the elders had tried and settled on. She too could hear all the dragons and she was READY to try out her own ideas, plus those of her contemporaries.

I liked her energy, her enthusiasm and the time she lived in - still close to the beginnings of human life on Pern but not hemmed in by a lot of "shoulds" and "must do" based on life and traditions of the Earth her forebears had come from. Which was not Pern...

I think Torene had exciting times. The stress and strain and ennui of the centuries of fighting Thread had yet to set in, and although you could see some things being forgotten already, much was still vividly remembered.