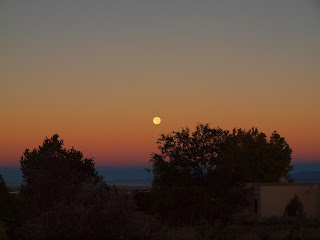 Caught this gorgeous full moon setting in the warm sunrise colors on my run this morning. Glad I took my camera along. Although it annoyed me bouncing around, so I had to tuck it inside my zippered hoodie - which made me look pregnant, though unnaturally so.

This week at the SFF Seven - whether by deliberate ploy or mental lapse (there's some debate on the topic - our calendar guru KAK missed giving us a topic. Therefore this week is an open "on-my-mind" theme.

What's on my mind? I hate to tell you guys, but it's marketing. And the love of money.

Quite topical, really, with the U.S. Presidential election coming down to its final days, with one candidate a multi-billionaire known for his devotion to building a commercial empire, his campaign heavily funded by other corporate giants.

But really it's mainly on my mind because I discovered last week that a "new" author selling incredibly well in a subgenre is a pseudonym for an woman who wrote in a totally different subgenre last year (and sold well, I understand) under a different pseudonym, both of which were different than the name under which she wrote a prominent review blog well known for taking authors to task for bad books and bad behavior.

Without going into detail, I can only say that this disturbs me because it feels so calculated. More than one of my sister authors - all equally disturbed - in discussing this new revelation said, "well, I guess she's laughing all the way to the bank."

And right. So it goes. She's found a formula that works, that apparently satisfies readers, and is making money at it. A lot of people will say there's nothing wrong with this, and there isn't.

There's nothing wrong with money. I happen to be a big fan of money, mostly because it makes for a much nicer quality of living. As someone who now totally relies on my book sales to pay the bills, I like for them to sell. Like most all of us, I suspect, I'd love to have a lot of money. I have a bathroom/kitchen dream remodel I like to fantasize about (and maybe collect pictures for, mumble, mumble). I'd love to travel and do it high end style. I'd like to have enough money that I wouldn't have to worry about money.

What's weird to me is that, several times lately when I've given my reason for not wanting to do certain kinds of marketing, or to plan books a certain way - which is that I believe some things are more important than money - people have actually laughed. And then they stop when they realize I'm not joking. Then kind of subside into an uncomfortable silence.

I suspect they think I'm being weird by saying that. Or perhaps naive.

Both could be true.

Still, I believe in this. The Bible says that the love of money is the root of all evil and the Taoists say that putting the pursuit of money above all else maddens the mind. This is a real thing - becoming consumed in the acquisition of money above all else can drive a person crazy. That's why we say money can't buy happiness. Sure, as David Lee Roth famously said, "Money can't buy happiness, but money can buy the big yacht you can park right next to where the happiness is." Why not? Hey! A big yacht could be great fun.

I had a birthday in August and, as is our culture these days, I received many good wishes via Facebook. It can be staggering, all those people - from ones I've known all my life to those I've never met in person, who may have only read my books - wishing me a happy birthday. A few however, were static images that said "happy birthday" or some such, along with the author's website address and book series. This was the first year I'd seen that. And I could imagine just how that came about. Some marketer gave the advice that when you wish someone a happy birthday on Facebook, you're missing a promotional opportunity if you don't have your author information on there.

My point is, what's more important to you - grabbing that promotional opportunity or wishing me well on my birthday? Maybe some of you are saying both. Maybe you're wisely pointing out that rando person I don't even know doesn't actually care about me or my birthday, so why would I even be naive about their intentions.

I just find it troublesome. If even wishing someone well on their birthday has an alternative agenda, what does that say about what's most important to us?

For me, writing books and telling stories is an expression of art. And I feel funny even typing that. Some of these writers of genre would curl their lip at me for that. Funny thing is - I've always celebrated that aspect of genre-writing. I started out in the literary/arts council world and grew weary of the nobly poor writer. I have zero patience with the idea that writing a good book takes years of angst and thrashing. When I transitioned from writing creative nonfiction to writing novels in fantasy and romance (and the interstitial places between), I loved this community for focusing on making it into a business. We're here to make a living at it. I've written before about the concept of selling out - and how I didn't believe in it. That "selling out" essentially demonizes making a profit from our art and that's bullshit.

I still believe that.

I also believe there are some things more important than money.

Telling a story for the story's sake is one. I think there's a huge difference between trope and formula. I believe there's a huge difference between art and manufacture. They might be difficult lines to draw, but I think we all have to find them. I believe there's a difference between creating something out of love versus designing it to sell. Maybe not in the end product - they may be indistinguishable - I mean for the creator. It's another version of me wishing someone a happy birthday out of a desire to celebrate their existence in the world and in my life, as opposed to doing it to gain attention.

I think personal integrity is more important than making money. I don't believe they're necessarily in opposition - you can both make money and have integrity - but if it comes to a choice between the two, then I choose integrity. My integrity may not be yours. Only we know what we're at peace with in our hearts. But I do think we all have to make this choice. It informs who we are as human beings.

I read an interesting essay recently by Joyce Carol Oates, Quilts, in a collection edited by Elizabeth Benedict called What My Mother Gave Me. (I linked to my Goodreads review of it - very much recommend the book.) Oates talks about an old quilt her mother gave her decades before, now very worn, and the comfort it gives her, now that her mother is gone, along with both her first and second husbands. She says,


In extremis we care very little for the public life - the life of the career - even the life of literature: it is comfort for which we yearn, but comfort can come to us from only a few, intimate sources.

There are more important things than money.

Email ThisBlogThis!Share to TwitterShare to FacebookShare to Pinterest
Labels: Jeffe Kennedy, marketing, money, the love of money, Writing to Market