On My Mind: The Unpredictability of Creativity 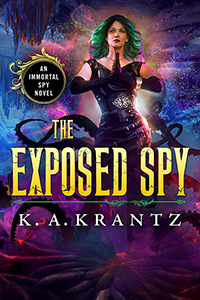 On my mind this week is the unpredictability and inconsistency of creativity. To wit, in time for Halloween, I'll finally release the fifth book in my Immortal Spy series, THE EXPOSED SPY, a full 22 months after I dropped book 4. In the Indie world, a two-year gap is series suicide.
Ack!
Couldn't be helped. No really. Fact is, it took me eighteen months to write it. I spent six of those trying to force a story that didn't want to happen. It took months and months of me coming at the plot from different angles to figure out why it wasn't working. Came down to not having the right foundation laid. The characters weren't far enough along in their development to support the plot. It was like I'd tried to skip ahead in the evolution of the series arc. Bad. Bad. No good. I needed to write an entirely different story that would force the characters to grow on-page to cement the foundation of the story that came after it. The story I was failing miserably to write.

Once I figured that out, I wrote the damn book. It was ready to launch this summer, but I hadn't finished book 6 yet, and I didn't dare risk another two-year gap between releases. Book 6 in stark contrast took me six months to write, which is pretty damn good for me. It's now off with the editors, so I'm feeling fairly comfortable with a January launch date.

Book 7, the final book in the series, is in the outlining phase. I've known how the series ends since Book 2. Now I just have to make sure the characters I've grown to love have a proper send-off. How long will it take me to write? No clue. Even with an outline, some days (or weeks, ugh) the words don't come. Being unable to predict how long it will take to write a book drives me insane. The inconsistency of ease from book to book is... GAH!

Still, there's nothing greater than finishing a story and sharing it with the world.

Meanwhile, here is the cover reveal for THE EXPOSED SPY, courtesy of the team at Gene Mollica Studios, dropping late October.