This week on SFF Seven, we're talking about whatever's on our minds. So, wheeeee!

Have I mentioned that my mind imagines it's a multitasker? It isn't, not really, but bless its little anthropomorphic heart, it does try.

One think: For the last few weeks, I've been reading a lot of newer SFF and noticing a pattern among the books that are getting attention. With a few fun, genre-typical exceptions, high-profile SFF of late feels very... literary. That is to say, it's got that sometimes confusing, deliberate, oh-what-pretty-words-you-know feel to it, which, being a former lit major, I totally enjoy.

A while back, the trend was to write a yarn that, only after a full reading revealed its intricacy and layers. Like, at first it just seemed like a genre romp, but later you realized it said something as well. Ursula K. LeGuin and Octavia Butler were masters at this. I'd put Neil Gaiman and Susanna Clarke -- of Jonathan Strange and Mr. Norrell, though I just started reading Piranesi and it has the same feel -- in there, too.

Some of my recent reads seem to have worked really hard to message at me and maybe lost a little of the engrossing storytelling along the way. No, I won't name them. They're absolutely worth reading. But what I'm finding is that achieving the perfect balance, hitting that sweet spot between genre fun and literary value, is really, really hard.

So, in an effort to improve my skill set, I looked into MFA programs. If you haven't done so recently, it might be a bit of an eye opener. They're...pricey. Plus, they appear to consist mostly of excellent critique groups with the occasional drop in by a well-known writer so students can gawk and hope. I dunno. If I trip over a bag of $50k, applying for an MFA program remains an option.

Failing a surprise inheritance, though, I think I'm back to iterating in private and hoping that I'm growing as a writer. I still keep writing things that I'm not confident sharing.

Oh! Except for one thing! (See what I mean about the badly multitasking brain? In Little Mermaid terms, somebody needs to nail that brain's fins to the floor.) Over the last year or so, I've been co-writing with the amazing Rebecca Royce. I know, right? Eee! I really enjoyed her SFR reverse-harem* Wings of Artemis series, and I messaged her and said, hey, if you ever get bored and want to co-write with me, I would be honored and thrilled. Shockingly, she took me up on the offer, and the first in our new Stranded Hearts series, The Girl Who Fell From the Sky, comes out October 12.

*Reverse harem, in case you're unfamiliar with the term, is a romance with one heroine hooking up with several men who all treat her really well and care for her and don't waste time posturing or being jealous of each other because they all love each other also and, just, there's a lot of love. We used to call these ménage books, but hey, terms change. If you're turned off by the word harem or poly stories in general, these books probably aren't your cuppa.

Also, it's almost October of an election year in the U.S., so I'm thinking of politics. No, I don't want to discuss, but if you live in the U.S., make sure you're registered to vote and once those polls are open, please do the thing. 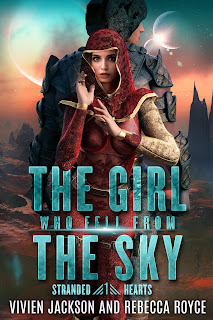