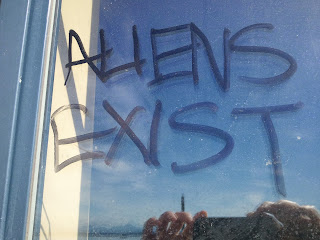 Plot bunnies are everywhere. In everything. In everyone. In snippets of conversations overheard in what passes for public these days. There's no need to hunt them. If you're open to them, you'll stumble over them at every turn. A little like tripping over a cat who wants to be fed.

Plot bunnies carry no malice as far as I can tell. Might they be distractions wrought by a brain desperate for a bit of cognitive conservation of resources? Sure. Human brains consume a crazy high percentage of the daily calories we consume. We're designed to want to shirk heavy mental loads. So along come plot bunnies to tempt us to follow them into the weeds in a day-dreamy daze. They could also just be the delight of human brains that are designed to take a bunch of disparate data bits and combine them into new and interesting patterns.

I can't say I notice that plot bunnies strike more often while I'm supposed to be working on something else. In fact, quite the contrary. For me they mob me when I'm already doing something else - something like taking a walk, washing dishes, vacuuming the floor - anything physical that requires low cognitive input. Ideas come gamboling out of nowhere. So it pays to have a strategy for handling them. Otherwise, you end up starting twenty bijillionty things and finishing exactly zero. Don't ask how I know this.

I pat my plot bunnies on their furry little heads, smile, and say, "It takes a number, and it stands in line." The idea gets jotted down in barest form - a few sentences - just enough to spark the idea back into life at a later time. The file gets a name and gets remanded to a folder with the imaginative name of "Story Ideas."

Have I ever mined that folder? Indeed, I have. The Nightmare Ink books were an idea languishing in "Story Ideas" folder when I hauled it out and got to serious work on it. The books and the original plot bunny bear only the slightest resemblance to one another. When a bunny graduates from the "Story Idea" folder, it gets a name of its own that serves as the working title for whatever it's going to become.

It means I have plot bunnies in various stages of metamorphosis. Some are still itty-bitty things nibbling grass. Others have turned into the Vorpal Bunny of Antioch. They've got these big teeth. I have one of them chewing on me right now. It looks a lot like Frankenstein's bunny, being a mishmash of Civil War historical, fantasy, and a little horror. It doesn't know what it wants to grow up to be, so we just keep staring at one another over the pages of the SFR I'm contracted for. So yes. Sometimes, the plot bunnies start looking a little like the clown from IT.