The Good, the Bad, the Easy, and the Difficult 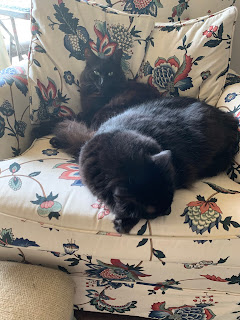 Two fer one Void Bois, speaking of who has it easy in this household.

The good, the bad, the easy, and the difficult.

If you're writing, you may run across a treatise by someone who likes to claim that ALL scenes should be easy. That you should always be itching to get to write those scenes because they excite you so much. Maybe it works that way for some people. Maybe there's a medication I could take that would make it that way for me. But writing isn't that way for me and I'll argue it's not for most writers. We all have different strengths. As a result, we're all going to be drawn to finding different scenes more attractive than others. For me, the easy scenes are the volunteers - the images, dialogue, and action that come to me from out of nowhere. There's a duel scene in Enemy Within that happened like that. Popped up out of nothing as I was trying to go to sleep one night. Little sleep was had that night while I got that scene down. It wrote itself, I just showed up to the go between for scene and keyboard. And it's a good scene. At least, I adore it.

But then there's the tough stuff. These are the scenes we agonize over. Well, okay. *I* do. I didn't get to do emo teen angst, okay? I make up for it when I write.

The tough scene came at the end of Enemy Within when I sat staring at the last (unwritten) quarter of the book wondering what on earth to do. It took a critique partner snapping at me to go away and make everything much, much worse for the final climax scene. It was just the kick in the brain necessary to really start digging into problem-solving those final pages. It was torturous and it took long, hard hours of writing and rewriting to make things as grim as they needed to be. But you know, a funny thing happened on the way to bloody and grim - I began enjoying myself. It was mighty damned satisfying to hack my way through the weeds and uncover something worthwhile. Hard as the scene was to write, I suspect it's an even better scene than the one that volunteered so readily.

And regardless. Both scenes were crucial to the arc of the story. So easy? Hard? Who cares so long as the end result is a finished novel.