Why? becasue I SUCK at book marketing, branding et al.

I'm on Facebook, Twitter, here and on http://jamesamoorebooks.com/  and I have genrefied. I have an Amazon page right here and I'm on Goodreads  right here.

I often report what I'm working on. I also post political rants against the current POTUS/Anti-Christ and lots of cute animal pictures.

Here's all the information on my next book:

So, here's the first scene from BOOMTOWN:

“There’s something wrong with the world when it’s cold enough to freeze a waterfall.” The trapper spoke to himself, or just possibly his horse, but neither of them responded. The proof of his comment lay above him and to his left, a frozen wall of white ice that only two days before had still been running water.
The cold was all-encompassing, a living thing that seemed to thrive on sucking the heat from the world around man and stallion alike. He called his horse Stomper and it was a massive thing, meant for hauling wagons. The black beast barely seemed to notice his weight or the burden of the sled behind it, but the cold sent plumes of steam from its muzzle with each breath. Covered in the thick coat he’d sewn for it, his stallion looked more like a locomotive than it did an animal. He wouldn’t see his beast of burden and closest living acquaintance killed by the elements if he could help it.
It wasn’t the elements, however, that had done most of the killing in the area. If he had to guess it was Indians. Someone must have driven them half mad if they were responsible for the bodies he kept finding.
The idea had been, as it always was, to shoot enough bison and foxes and wolves to load his sled with furs. Instead, he’d been gathering the dead for the last two days. He didn’t have it in him to leave them frozen to the ground for animals to feast on. His mother would surely rise from her grave and beat his fool head into a new shape if he ever got that callous.
Didn’t much help him get his work done, but there was enough money set aside and as a trapper and hunter it wasn’t overly likely that he’d starve any time soon.
The latest body showed itself on the left side of the trail, and he nodded his head and tugged the reins. Stomper came to a halt and snorted agreeably.
The trapper slid from his saddle with practiced ease and walked over to the latest grisly find. Nine bodies so far, each one cut, shot and in different stages of undress, depending on the sex. There were two women who had likely been of marrying age among the dead. There was also a little girl child and an old woman who should have never headed from the east to the wilds. Only the crone had any clothes on her by the time the murdering dogs were done. The others had been treated as poorly as the whores in San Francisco, and that was poorly indeed.
The man in the snow stared with dead eyes behind thin spectacles. The frost on the lenses hid the color of his eyes and made him look blind as well as dead.
That he was dead was obvious. Even if he’d not been frozen to the ground there were lacerations on his skin and shreds of meat and flesh peeking from under his tattered clothing. Like the waterfall a short way back the trickles of blood had frozen into twists of crimson that hung suspended from his wounds. If he had to guess, the trapper would have told anyone curious that he suspected the man had been dragged behind a horse for a while. His shoes were torn apart—a pity that, as they could have fetched a few cents—and his clothing, thin and fine and no doubt very expensive, had peeled half way from his body during the long trip. Ropes still bound his hands and cut into the flesh of his wrists and forearms. He’d very likely fought hard to get away before his attackers had finished with their job.
“Well, sir, I’m sorry to meet you this way.” He looked the body over again and frowned. Someone, his killers or otherwise, had turned out the man’s pockets and taken everything that might have value. The cloth of his vest was split where his watch fop had been torn away. The derby he’d likely worn at one time was nearby and judging by how clean it was, he guessed it had been dropped by the killer after the fact.
“I reckon we should get to work, old boy.” The wind let out a moan from the nearby trees and sent an additional shiver through him. No one else bothered to reply and he reckoned that was for the best.
He took the axe and pick from the bundle he kept on Stomper’s flank and got to digging. The night before had seen a hard, freezing rain and the body was stuck in a thick caul of ice and mud.
Ten minutes later he had a rope wrapped around both wrists—new rope that had not frozen into the ground—and he tied that to Stomper’s sled before urging his horse forward. The ground gave up its prize reluctantly, and for a moment the trapper thought the corpse would break like a sapling before it finally came free with a crunching sound.
Once uprooted the dead man slithered stiffly across the ice and bounced off two aspen trees before coming to a rest. He slid the body across the ice until he could wrestle the weight onto the back of the sled.
He had leather aplenty and he used it to lash the body on top of the other corpses.
“Well, sir. You’re the tenth and I pray the last. Let’s see about getting you to Carson’s Point. Might be we can arrange a funeral for you.”
The rain started again, dropping from the sky in a half-frozen state and solidifying as soon as it touched the ground. The sound it made as it rattled to the earth was not unlike a dozen sets of teeth chattering away.
“I’d never wish a good man to hell, sir, but I reckon it just might be warmer at either end of the journey than it is here.”

Cover art and back cover text: 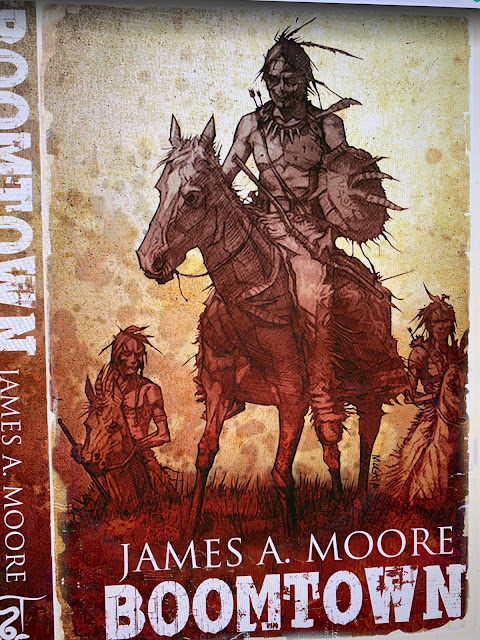 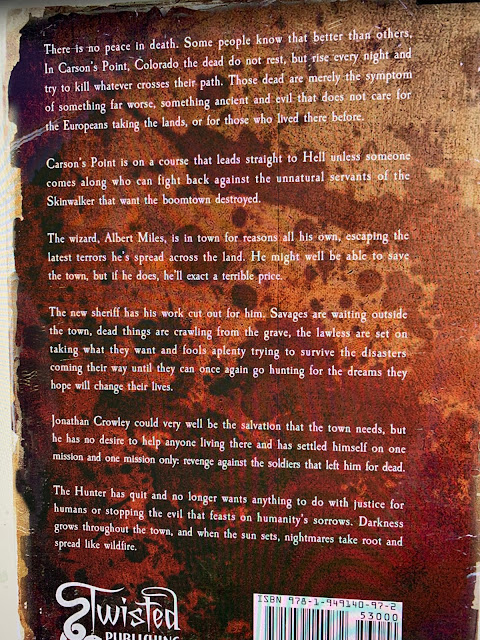 Later today I'm even supposed to have a release date.

I'm not very good at this self-promotion thing, but I'll keep winging it