The Godparents: Jeffe's Top Five Influences as a Writer 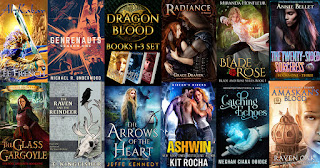 We're heading into the last week of the Science Fiction and Fantasy Writers of America (SFWA) Fantasy Storybundle. The theme is "Kickass Heroines" and this is such a kickass collection. I was one of the first to download it, even though my own book is in it, and I've read a couple of others. So many fantastic books for an amazing price.

The Bundle was curated by Terry Mixon who says:

SFWA is over 50 years old and its membership consists of professional writers and publishing professionals from around the globe. It administers the Nebula Awards each year, and so very much more. It was a real pleasure reading the submissions from SFWA members this year and, as every year, we had a rough time narrowing the selection to just a few books. We think you'll be delighted as there is something for everyone in this great bundle.

• The Arrows of the Heart by Jeffe Kennedy. What do you do when your boyfriend is an animal? Really. An animal.

• The Twenty-Sided Sorceress, Books 1-3 by Annie Bellet. Gamer. Nerd. Sorceress. After twenty-five years fleeing from a powerful sorcerer, a mostly-human woman is finally safe – if she can resist using her magic. Or can she?

• The Dragon Blood Collection, Books 1-3 by Lindsay Buroker. A dashing pilot, a comely sorceress, and a smart-mouthed soulsword all come together in a world intent on killing them.

• Radiance by Grace Draven. A marriage between alien kingdoms – and two "spares" who find beauty in each other, and that heroism comes in many forms.

• Ashwin by Kit Rocha. Can a genetically manipulated soldier be a hero? A healer finds a way to love a man without feelings—and fight for brightness in a dark world.

• The Raven and the Reindeer by Ursula Vernon. An enthralling remix of a classic fairy tale, with a practical heroine who follows her heart to a very different ending.

There are more than those, too. Check out the deal here.

*****
Our topic this week at the SFF Seven is "The Godparents: Your top five influences as a writer."

At least the person who suggested this one is letting me have five?

This isn't the definitive list, but it does come pretty close to encapsulating my major influences. These are the authors I not only love, but who influenced the way I write.

I linked to the best pages I could find for each (avoiding Wikipedia if possible). Sadly Tanith Lee and Anne McCaffrey are both dead now. I have no idea why three of them are "Mc" names - except that perhaps I identify with the Celtic voice, and they would've all been shelved close together. This goes beyond discoverability, however, as I started reading Robin McKinley much later.

All of these women write vividly sensual fantasy with women who are the front and center heroes of their own journeys. (With Anne Rice, it depends on the book.) They all created worlds I wanted to live in, presented complex interpersonal relationships, and explored shades of morality in fascinating ways.

They have been wonderful Godmothers to me, one and all.