Hands on Keyboard, Butt out of Chair 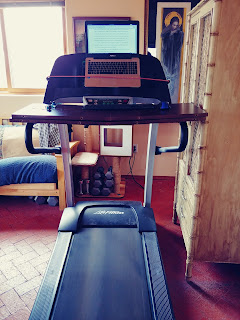 Our topic at the SFF Seven this week is the deceptively simple "Perfect Writing Snacks."

I say it's deceptively simple because I'm going to have to pull a Veronica Scott this week and say that I just have nothing on this one.

I don't snack while I'm writing. Really, I don't snack much at all. The way I grew up, we pretty much just ate at mealtimes, maybe a nibble with drinks at cocktail hour. Also, my whole ethic is bent in the opposite direction. I don't snack while I write because it would interfere with my hands on the keyboard. It's also difficult to eat while walking, which is what I do while writing.

There's a saying a lot of writers pass around, that the way to get the words down is "Butt in Chair, Hands on Keyboard," or BICHOK. While I agree with the spirit of the saying, I don't like it because I'm not a fan of sitting. I walk while I write and it's been the most amazing thing for me.

I got my first treadmill desk in February of 2013, so over six years ago (wow!). Since that time, I've gotten so that I generally walk about 10 miles/day while writing. The trance-state induction of steady walking is amazing for writing flow, and the movement keeps my brain alert.

I have the same hydraulic desk, which I can raise and lower as I wish. I absolutely recommend that model. I'm on my second under-desk treadmill, which is about how it goes, since they do wear out.

If you listen to my podcast, First Cup of Coffee, you know that my current treadmill started tanking on me. The horrors! The folks at LifeSpan (I have this model) have been great and are sending me a new motor, since it's still under warranty. The techs come on Wednesday to install it and give the whole thing a tune-up.

Until then, I was deeply unsettled. I'm working hard on finishing THE FIERY CITADEL, sequel to September's THE ORCHID THRONE, and I need to walk to write!

Okay... maybe I don't NEED to, but I hate to mess with my process. I really do. And you all know that I'm always saying that the most important thing is that we own our process as writers, and that means doing what it takes to facilitate that process.

So, my hubs David suggested that we rig up something temporary on the running treadmill. (Yes, we're a two-treadmill household, but a walking desk treadmill needs a motor that runs well for long times at low speeds, which is not the same kind of motor that you need to run at faster speeds.) Thus, above, is my temporary workstation. Those are the leaves for expanding the dining room table across the handle bars, and the ever-useful bungee cord strapping on the laptop. I have a wireless keyboard I love for the key action, so that's nice and familiar.

There's even a glimpse of the book, for the clever reader.

I wouldn't use this system for long, but it works for now.