Show Me the Money! (Or at Least Don't Make ME Pay) 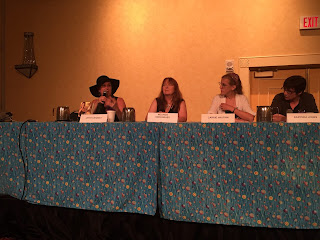 Our topic at the SFF Seven this week is Lit Cons, Fan Cons, Comics Cons: What’s Best For You?

I imagine there will be a variety of replies to this topic - and maybe someone will take on defining each - but I'm taking a bit of a slant and talking about the stance I've taken on conventions in general.

Aside from professional conventions like the RWA National Conference or SFWA's Nebula Conference, which I attend for my own networking, craft improvement, etc., I've established a personal policy of not attending conventions that ask me to pay my own way.

Now, there are some gray areas here. The panel above - where everyone is clearly RAPT by the wisdom I'm sharing - is at Bubonicon here in New Mexico. It's a "local" SFF convention that I attend most years for various reasons. They don't pay my travel, but they do comp my registration. And it's close for me, and staffed by a lot of people who do many things to support my books.

That tends to be the model for a lot of smaller fan conventions: they invite authors, comp the registration (or sometimes only reduce it), and provide opportunities to network with readers. Unless you're a GOH (Guest of Honor), however, that's as far as it goes.

Romance fan conventions tend to offer a much worse deal. I can speculate on the reasons for it (though I won't), but a number of "reader conventions" sprang up in the last decade or so that not only required authors to pay all their own expenses, not only never comped or discounted registration, but also required authors to pay full registration or significantly MORE than readers paid, and then repeatedly urged authors to chip in even more money for gifts, meals, promo, etc.

In essence, these cons sustained themselves on the author's dollars, relying on them both for content and to pay for the con. In return, they offered exposure to readers, but very often even that fell flat, with the con mostly attended by other authors and the readers that did attend were frequently regular attendees or existing fans.

I stopped doing these.

Not because I didn't have fun - I often did! - but because I was paying a sometimes HUGE amount of money to gain maybe a few new readers at best.

She makes really excellent points. Which I'll bullet a few salient points in case you don't want to go to the tweet thread, though she puts it better.

That about sums it up for me. I love going to cons, but I have to budget where I go. I don't expect to make money off of attending. At the same time, I won't come away in debt.