Writing Is a Snack Free Zone


Here we go again with a theme for the weekly post that I don’t have much of anything to say, not because I dislike the theme but because it doesn’t apply to me.

If I’m writing, I’m writing and my hands are in constant motion, typing.
I’m not a snack-y person really. I have an apple in mid-morning, a string cheese if I’m feeling extra hungry in between meals and need protein and either a banana or an apple between dinner and bedtime. I might have a cup of tea on occasion and that I may actually drink while I’m sitting here at the keyboard, but is tea considered a ‘snack’?

On snacks in general, I used to love M&M’s, maybe when reading, but on three occasions over the years I’ve had one go down the wrong way and nearly asphyxiated, which since I actually came within a few seconds of brain death years ago and required heroic Heimlich maneuvers from the friend I was out with (that occasion was a piece of toast, not candy)….I have considerable anxiety on the topic. So M&M’s are off my list of edibles. Sorry, little guys!
*******************************

VS Note:  107 years ago this week, the Titanic hit an iceberg in the North Atlantic and sank with a terrible loss of life. I was always fascinated by the sinking and wrote my scifi action adventure novel WRECK OF THE NEBULA DREAM loosely based on the events, but set in the far future on an interstellar cruise liner. There is a romance but the book is much less steamy than my normal stories. I later wrote a sequel about two of the supporting characters in response to numerous reader requests. STAR SURVIVOR is written in my steamier style. 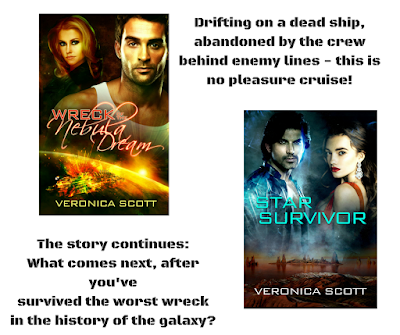