Our topic this week has the intense title “Knife in the Heart: The Harshest, Meanest Rejections from a Publisher/Editor/Agent.”

I want to be respectful of my fellow SFF7 authors, some of whom have told really painful tales this week and I sympathize with them and everyone else who’s suffered this type of trauma, versus the one star review on a book situation or any other type of feedback, like a job performance evaluation.

But here I am again, the SFF7 maverick without much to say. All I can talk about are marshmallow type rejections. (By which I mean they didn't carry any extra hard edges...)

I never wanted an agent so I never subbed to any so I have no rejections there.

I’ve never received a mean or harsh set of notes from an editor. I’ve gotten all kinds of notes of course, including my personal favorite where I had the brilliant idea to have my alien who could be invisible leaving visible slime trails. Um, okay, time to rethink THAT plot point for sure. The phrase ‘slime trails’ is now a catch phrase in my family. But it wasn’t pointed out to me in a mean or derogatory fashion. More of a tongue in cheek “I think you have a problem here.”

I didn’t really pursue becoming traditionally published so I don’t have stories from the trenches of subbing things to gate keepers. I did send a few stories to magazines in high school but it wasn’t much of a serious attempt to become published. I was such a newb to the whole idea of publishing – I had no idea what I was doing. I still can’t understand why TEEN didn’t fall all over themselves to buy my fabulous romantic short story between an American student and a dashing matador (no doubt heavily influenced by the Harlequins I was reading at the time but certainly not up to HQN standards); however the rejection was the standard form letter. I even got a rejection from ANALOG, from Mr. Campbell himself…but yup, form letter. I never received a personal rejection.

I believe once or maybe twice in the intervening years while I was pursuing my career in business at NASA/JPL I might have gotten myself energized to type (no word processor at that point) an entire science fiction novel, put it in a box, add the SASE and send it off to the general address for a publisher. But again, I had no idea what I was doing, knew no other authors, hadn’t a clue about writing to market or the essentials of the craft…so eventually a form letter showed up and I wasn’t too surprised.

In late 2010 I decided I could now make the effort to really hone my craft and do my best to become published. In 2011 Carina Press acquired the first thing I ever submitted in that iteration of seriously working to become published and in 2012 my first book was released by them. So, again, no rejections.

I did get a few after that, including a revise and resubmit letter from Carina on the second book in my projected series, but again, all professional, collaborative, nothing unpleasant. I subbed something to Harper Voyager (? I think maybe it was them) and made it past the first round before getting a nice form letter email of rejection. By then I was full blown on my self-publishing career and have never been in a position again to encounter gate keepers with the power to say hurtful things to me.

I just have to keep pleasing my readers and that’s a pleasure!
As it happens, this past week my eighth book in the ancient Egyptian paranormal connected series was released. (The title that Carina Press acquired was Priestess of the Nile.) Yes, mostly I write scifi romance but I like to treat myself to a total change of pace and visit 1550 BCE at least once a year. 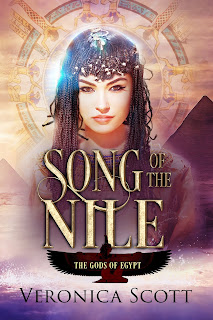 Here’s the blurb for the new book, Song of the Nile:
Merneith, a harpist of rare talents, blessed by the goddess Hathor, has recently arrived in Thebes and joined Pharaoh’s court, but must hide secrets from her past. As she settles into her new life in the palace, the one man she can’t forget and followed to Thebes is unaccountably absent.

Nikare, a Medjai police officer serving under Pharaoh’s direct orders, is now deep undercover investigating high crimes against Egypt and forbidden to contact Merneith. Masquerading as a priest to deceive the plotters, he watches over her from afar and longs for the day he can approach her openly.

When an unscrupulous noble ensnares Merneith in the web of evil Nikare is pledged to bring down, the two must stand together against earthly and magical forces to save their own lives and protect Egypt.

How much help will the gods provide? Will the pair survive the final showdown between Pharaoh and the conspirators and find the happy future together they desire?

This is a standalone novel but is also a direct sequel to Lady of the Nile, which is where Merneith and Nikare were first encountered as supporting characters. Now they move front and center in the fight to protect Egypt from a new threat. Mild spoilers for Lady of the Nile.
Buy Links: Amazon     Apple Books     Nook
Coming soon: Kobo and   Google