Still Bleeding - the Worst Rejection Ever

I had to share this tweet from Agent Sarah. We got the cover flats for THE ORCHID THRONE (out in September 2019, but review copies are going out now - eep!) and they have foil! That's the shiny stuff on the cover. It shows best in the video from her tweet, but here's a still pic, in case the video doesn't play. Super cool, huh? It's my first cover with foil, and it's SO PRETTY! 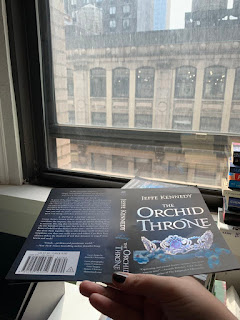 Our topic at the SFF Seven this week is Knife in the Heart: The Harshest, Meanest Rejections from a Publisher/Editor/Agent. I think this is a great topic because it's always good to hear that *every* author receives rejections. While 99% of them are usually vaguely kind, there's always some who have to be vicious about it.

This was on my mind the other day because there's one rejection I received about 25 years ago, when I was a super newbie author - and it was so mean I STILL THINK ABOUT IT TO THIS DAY.

I know, I know - I should really let it go. For the most part, I really have. I don't feel bad about it, but I do remember the words from this editor and they float back into my head from time to time.

So, I'd made this Huge Life Change™ and gone from a PhD program in Neuroscience to working as an editor/writer for a petroleum research group. The job had flexible hours, paid well, and let me develop my chops as a writer. I'd decided I didn't want to be a research scientist and wanted to be a writer instead. As part of this effort, I took courses from visiting writers at the university. One of the first was the class Essays on Self and Place. Thus, my early writing efforts were personal essays, also known as Creative Nonfiction.

(In fact, my first book was an essay collection: WYOMING TRUCKS, TRUE LOVE AND THE WEATHER CHANNEL.)

But before that happened, I was doing the magazine circuit. I'd send out work to places that published essays, from literary journals to commercial magazines. And I sold essays to that broad gamut, with my biggest score an essay I sold to Redbook for $1/word. I built this career largely through writing a lot and sheer tenacity. Which, come to think of it, is what I still do.

I'd read a piece of advice from some author I can't recall now to treat submitting like a game of ping pong. You submitted work, and as soon as it got rejected, you batted it right back out to another venue. I even called my folder of essays I was actively submitting "Ping Pong." I had a rule that I had to have every finished piece on active submission at three places at one time. As soon as a rejection arrived in the mail - and these were the days of paper printouts sent in the mail with a self-addressed, stamped envelope (the infamous SASE) - I had to whack that essay back out right away. I kept a list of publication venues (in a spreadsheet, OF COURSE), in order of preference, and I'd just go to the next on the list.

All in all, this approach worked very well for me. Treating the submission/rejection process like a game helped to take the sting out of rejections. It also meant I got a LOT of rejections. Every time that envelope showed up in my mailbox, addressed in my own hand, I'd feel the pain. They almost never *accepted* via the SASE. An acceptance came via phone call, maybe email (depending on the year), or as a thick envelope with their own postage containing a contract. Maybe even a check! I always wondered what they did with my SASEs in those cases, but it seemed cheap to ask for them back, even though I could have reused them.

So, yes, I received many, many rejections of various flavors, but I also published work at a steady rate in a variety of venues. I kept up a high velocity in my personal game of ping pong. It worked well.

This one magazine though...

It was called something like Women's World Weekly. I could be conflating several publications. But I do recall I discovered it in the Women's Bathroom at the petroleum research institute I worked in. Someone left copies in there every week. It was low-quality paper, with lots of ads for things women supposedly liked, and then those kind of heart-wrenching "real life" stories of love and loss.

So I sent them one of my essays on love and loss. And I got a rejection back pretty fast - hand-written, saying that it wasn't exactly the kind of thing for them - too long, or whatever. This was early on and I didn't always pay attention to the content of the rejections. Often they didn't say all that much that was useful. Also, I came from a scientific background and the non-scientific nature of their criteria often stymied me. Finally, I was busy - and the game of ping pong meant I had to get stuff back out there rapidly.

I sent them another essay on love and loss. I got another rejection saying no, it wouldn't work for them.

I sent a third essay. (Maybe I only sent two, but it might have been the third submission.) And I got this hand-written, black-ink, furious scrawl that said:

YOU JUST DON'T GET IT, JEFFE!

And I don't remember the rest. It was some sort of excoriation on how my work would never, ever, in a million years, be right for them.

Thing is - they were probably right. And it was true, that I didn't "get it." I was very new at that point, and green. I didn't yet understand how to discern what a particular publication or editor preferred. I viewed it all as a vast crapshoot - or a game of ping pong - and figured the right thing at the right time was what got accepted.

Which is actually very true.

But there was something in the sheer venom of that rejection that has always stuck with me. And sometimes I hear that guy's voice - the editor was male, which is interesting in retrospect - shouting at me in that scribbled note, telling me that my work was a waste of his time.

Of course, I took that publication off my spreadsheet and never submitted there again, which likely came as a relief to them. I sold those essays elsewhere, and I've gone on to build a career.

Still, every time someone implies that I "just don't get it," I feel the twinge of that knife to the heart. Funny, what gets to us, huh?