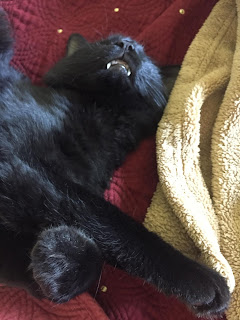 Today's photo brought to you by He Who is Fussed By Nothing. This is Crow, 'helping' me get this manuscript finished.

As to godsawful rejection stories. Mine is pretty tame, but I do still hold a grudge. So there is that.

One of the great benefits of having gone through an acting conservatory program was that we actually had training in how to handle rejection. There were rules. First rule was: It's never, ever personal. It may FEEL personal, but it's not. It could happen that you'd walk into an audition situation and a casting director would stop you and send you home before you'd even opened your mouth. How was that not personal? Easy. You had to realize that you probably look like that casting director's ex and there's not a damned thing you can do to counter that.

So when I screwed up the courage to start submitting my writing for publication, I figured I was pretty well adjusted for handling rejection. And to be honest, for 99.9% of the time, I absolutely was. Mainly because the rejections were all so professional and nonjudgemental. It's all been stuff like, "I just bought a story on this same theme. Sorry." That was my very first rejection and was from Marion Zimmer Bradley. It was a sweet way of laughing in my face and not saying, "OMG, this tired theme? Again? Did you not read or pay attention to my guidelines at all??" It's only after years of rejection letters that I've learned to read between the polite lines to the core of what an editor wants to say with their carefully worded 'thanks but no thanks' letters.

I subbed a story I very much loved to a small house that still exists (and which, will therefore not be named.) I'd talked to the editor at conference and been invited to sub. The rejection letter I received straight up said, "Writing's not good enough." Those exact words. You may deduce from this that the editor was male and you'd be correct. At the time, other writers shrugged when I raged over it. "Eh. It's the business. Get over it." No. It isn't the business. That's the point. It's an opinion. It's a value judgement in a business were editors have no professional business telling writers their work isn't good enough. Do it on Facebook and people will call you out for shit posting. Professionals stick to facts. The facts were that my work wasn't appropriate for this editor's line(s). Fine. Say so. That's a professional, business oriented rejection. I don't require a break down of what it is about the work that doesn't work for someone. That input is ALWAYS appreciated, but never expected.  The professional, no value-judgement rejection is what the romance industry has pretty much mastered and has been the standard rejections I've received. Except for this one editor (who no longer works in the business, much to my satisfaction.)

Does that make me petty? Good. I'm comfortable with that. The best revenge is to have been published, won awards, AND outlasted the jerk judgy.