Oh dear readers, if you thought yesterday's post was a prank, I assure you, James is not April Foolin' around with his latest creepy #western #horror release, BOOMTOWN. Turn on the lights, grab a blanket to hide under, and try not to scream as Jonathan Crowley returns to scare the bejesus out of you. 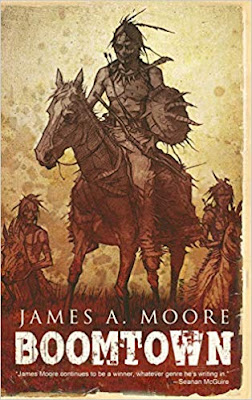 There is no peace in death. Some people know that better than others, In Carson’s Point, Colorado the dead do not rest, but rise every night and try to kill whatever crosses their path. Those dead are merely the symptom of something far worse, something ancient and evil that does not care for the Europeans taking the lands, or for those who lived there before.

The living do not matter, the dead are tools, the possible spawn of the pale, white thing lurking in the woods are all that is important to that dreadful force. It will kill anything that gets in its path and make the living and the deceased suffer for their transgressions.

Carson’s Point is on a course that leads straight to Hell unless something comes along that can fight back against the unnatural servants of the thing that wants the boomtown destroyed.

The wizard, Albert Miles, is in town for reasons all his own, escaping the latest terrors he’s spread across the land. He might well be able to save the town, but if he does, he’ll exact a terrible price.

The new sheriff has his work cut out for him. There are savages waiting outside the town, dead things crawling from the grave, bad men set on taking what they want and fools aplenty trying to survive the disasters coming their way until they can once again go hunting for the dreams they hope will change their lives.

Jonathan Crowley could very well be the salvation that the town needs, but he has no desire to help anyone living there and has settled himself on one mission and one mission only: revenge against the soldiers that left him for dead.

The Hunter has quit and no longer wants anything to do with justice for humans or stopping the evil things that feast on humanity’s sorrows. Evil grows throughout the town, mortal evil and things far worse. And when the sun sets, that evil takes root and spreads like wildfire.