James is kickin' it in the movie tie-in business; ALIEN, PREDATOR, and now the Marvel Universe!  So if you're suffering an AVENGERS: ENDGAME hangover and want to linger in the world of the Earth's greatest heroes, buy this book today! 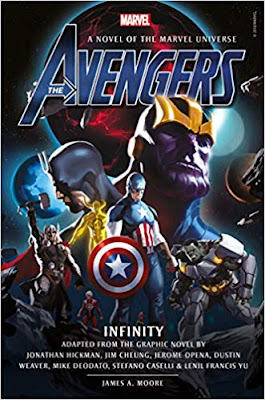 
The Avengers journey into deep space, where they unite the intergalactic races against the Builders--deadly aliens who seek to destroy the known galaxy. While the heroes are gone, Thanos sets his sights on Earth, sending the Black Order to launch the assault. It falls to the Inhumans, Black Panther, Doctor Strange, the X-Men, and more to defend the planet.

It falls to the other heroes of Earth--the Inhumans, the Black Panther, Namor the Sub-Mariner, Doctor Strange, the X-Men, and more--to defend Attilan, Wakanda, Atlantis, and the rest of the planet. To defeat Thanos, the defending forces will need to employ a new weapon--one that may be as deadly as the invading force.