Just for the Fun of It

Creativity is rarely sticks to a single track. Writing may be my major means of processing the world and my experiences of it, but once you start getting paid for a creative endeavor, it's vital to have other creative outlets. It's especially vital to have have creative outlets that have zero pressure on them. We all need space to for Beginner's Mind. We all need space to experiment and try things without any expectations around the outcome. It's necessary to do things where you've given yourself permission to do them simply because you enjoy them - even and especially if you do them badly. I think it's super important to do things where enjoyment and outcome are divorced from one another. Most of us who write started writing simply because we enjoyed it. We enjoyed the process of telling a story, even if the story we told was riddled with errors or lacked conflict or a character arc. We just wrote because it was fun.

Then one day, someone sat up and said, hey, I'll pay you for that story! Also, I want to pay you to write it again! Exactly like this one, only different! But I need  you to do it three days! GO!

The pressure to Get It Right (TM) is real and it's heavy. So yes. Having other creative places to go for rest and fun matter. When it comes to creative activity other than writing, I'm a bit of a dilettante.

Most of the time, I cook or bake. This morning, it was a thrown-together, totally made up vegan buckwheat pancake batter. Hit out of the park, too. Usually, preference is given to recipes I haven't tried before, and I like the complicated ones with a reasonable chance of failure. Yeah, I don't know why. I like the experimental nature of it, I guess. I like going into the process knowing there's a chance it will be inedible at the end - or I'm going to end up with something tasty. Either way, it weirdly takes a lot of pressure off. I cop to having a tic about NEW. I crave new. Given a choice between something I've done or eaten before and something new, I will almost always go with the new thing just for the dopamine hit of new experience.

I'm not entirely sure this is a creative pursuit, but I garden. I like painting with flowers and getting my 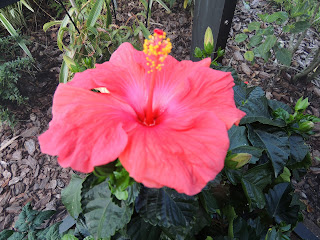 hands in the dirt. I'm trying to build something aesthetically pleasing (to me) and that feeds to pollinators. Failure is definitely a thing here because Florida's planting and growing season is reversed from just about every place else in the US. Summer is when everything dies. Or rots because of the combination of heat and humidity. I'm still learning the vagaries. But at the moment, the front yard looks pretty good.

I paint. Pictures. Rooms. Rescued furniture. Unicorn Spit is my friend. Yes, it's a paint brand. I'm also fond of Dixie Belle paints. Also let me note that while I'm pretty darned good at painting a room, all other painting is done poorly. There's a reason I only rehab rescued furniture. I need cheap canvases so I can try things and make mistakes and learn without destroying something that cost actual money. I've tried paint pours and while I love the results, it's expensive from a paint standpoint. It's a resource intensive method and I'm not to the point where I can justify that kind of outgo for experiments and learning curve.

On low spoon days, I might take pictures. They won't be anything special usually and if they are something special it's a complete accident. Yes, I look for perspectives and shots that intrigue me, but I utterly lack the gene that could make me care about F-stops and Apertures.

When I need something more active, I dance. Badly. But the point of dancing isn't to be good. Or beautiful. It's not ballet. Modern, maybe. Anything I feel like, definitely. It's good therapy. I find it particularly useful for handling anger. It's cleansing in a way other activities might not always be. I have to be in a spiteful mental space for dance though, because I have to not care at all what anyone else thinks or says. And I have to not care that my music might not be to everyone's taste. There are days that the Too bad, so sad energy is a nice, healthy reset. (I mean, obviously not when someone is ill or trying to sleep - this is why the gods created noise cancelling headphones.)

All of these creative pursuits feed my main creative drive to write. They keep me from going too crazy when writing isn't going the way I want. Occasionally, I'll be in the middle of one of them and unbidden, some story tidbit will poke its head up and volunteer a story snippet. But whether that happens or not, each of these activities are worth spending time on in their own right. Just don't ask me to sew. I really, really suck at that.