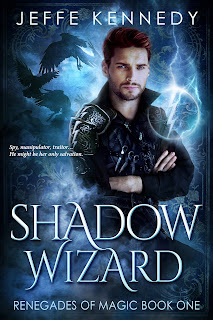 If you missed it, SHADOW WIZARD is now available for preorder! It releases September 29, 2022. This is Book One in my new trilogy, Renegades of Magic, and continues the story begun in the Bonds of Magic trilogy. Preorder links below!

Our topic this week at the SFF Seven involves our non-writing hobbies.
In various discussions around burn-out and sustainably productive writing habits, I've discovered that many professional authors (as in, getting paid to do it) have another creative outlet that is non-monetized. Ted Kooser, a U.S. Poet Laureate (1004-1006), told me that he painted as a hobby. His paintings were apparently glorious and much-sought, but he'd made the decision to only give them away. It was important to him to have a creative outlet that wasn't connected to money. This was a startling thought to me at the time, and one I've come back to often.
Other authors I've talked with in various scenarios have also discovered that approach: that having a non-monetized creative outlet not only refills the well, but prevents burnout (or allows a creator to recover from it).
What happens to many of us - and I'm speaking of authors, but I imagine it happens with all creatives - is that we begin with writing as the hobby. It's the passion, the special something that we do because we LOVE it. Eventually, with persistence, hard work, and luck, we make that hobby into the profession. Then it's no longer the alternative to the day job and other responsibilities. It's become work.
Which, let me be clear, is good and natural. I'm a big believer in treating writing like my job. That's how I support myself and my family.
Still, to manage the creative self, I've found I need other outlets to refill the well and take the place of that other, special, and relaxing Thing. Keeping it non-monetized is the challenge. Especially since the pandemic began, I think we've all become adept at casting about for side-gigs. In fact, the gig-culture was going strong before that. It's tempting to take that successful hobby - I imagine Ted Kooser's friends admiring a painting, offering money for it, and him turning it down with a slight smile and shake of his head - and begin to dream of taking that art viral and making an avalanche of comforting money from it.
I sometimes think there's a certain magic in refusing that temptation, in enjoying creativity for its own sake.
And magic is precious.