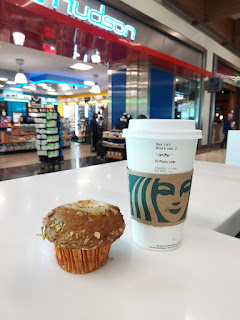 This week at the SFF Seven, we’re discussing work ethic and asking each other what we do to keep balanced and writing regularly?

Many of you already know I’m kind of a fiend for building a writing habit. That’s because, once I stopped resisting the idea and starting doing it – by writing every day at the same time every day – that habit carried me through all sorts of difficulties.

For example, I’m on a plane as I type this, heading to WorldCon in Chicago. I was reading a novel (Lisa Klepas, Marrying Winterborne, highly recommend!) as the plane taxied and took off. Once we reached cruising altitude, I began to feel the prodding of habit. “Time to write!” it urges. So, I pulled out the laptop to write this blog post. Then I’ll turn to my draft of Shadow Wizard, which I need to get done.

Yes, I write every (weekday) morning. That’s how I can count on getting the book done.

Last week I visited family and there were many family goings on. There was some emotional stuff to deal with, aging parents and all that involves, and it threw me for the remainder of the week. I wasn’t productive. I was feeling stressed. I’d been knocked out of my routine by life, which is the way of life. It would be nice (in theory) if I lived in some hermitage or remote villa where all days flowed by as serene as my view of the Mediterranean Sea, but I don’t. I live in a beautiful place (no ocean) and my life is relatively even and peaceful, but I’m connected to people and life happens.

By the following Monday, I was able to slide back into my writing habit like a pair of comfortable yoga pants. Morning writing was waiting for me, restoring the necessary balance. It felt good. That’s the beauty of habit – it does all the hard work for you.