Veronica's been busy this year! Our favorite Saturday blogger dropped her latest Badari Warriors Sci-Fi Romance this week. JAMOKAN is lucky # 13 in the series, but it also stands alone. Get yourself a Happily Ever After for the holidays and stay warm with some futuristic steam! 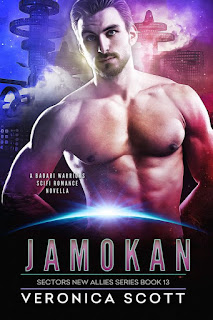 Badari Alpha Jamokan and his pack are growing discontented in the sanctuary valley, tired of coming in second place to the pushy new South Seas pack when it comes to assignments and everything else. On top of the discord within his pack, Jamokan is distracted by the search for the right woman to be a proper Alpha’s mate to partner with him in combat and in everyday life. Even the Badari goddess is warning him in visions that he and his pack are on the wrong path for a happy future. In desperation, he receives permission to take his entire pack north to the mountains for a two-week hunting expedition, where he hopes to use the time and rugged surroundings to settle the soldiers down and restore order and discipline.

And figure out his own future.

When his men unexpectedly locate a hidden Khagrish lab, he goes to investigate and see if there are humans to be rescued. Little does he suspect he’ll be called upon to break one of the highest commandments of the Badari packs and bring a new disaster to those who look to him for leadership.

Before she became a Khagrish prisoner, Rosemari Parcher was a hydroponics technician on a gritty colony world, who unexpectedly won a planetwide contest. Tapped to receive her heart’s desire and move to a totally different life in the luxurious Inner Sectors, her life had become a happy dream. Kidnapped in space by enemy aliens and given to the Khagrish, she and other humans are the unwilling subjects of a bizarre medical experiment where a quick death seems to be her only hope. Rescued by Jamokan and his pack, she finds herself deeply attracted to the Alpha but the devious Khagrish aren’t through with Rosemari or the experiment.