What If The School Janitor Was The Hero?

Did I get your attention with the headline? Bet you thought the janitor was a dude. Nah. DD Chance kicks off her fast-paced paranormal HFN romance series with a gal who doesn't take herself too seriously. While she doesn't feel the need to settle down Right Now, she isn't averse to sampling the guys-of-the-moment either.

If you're up for a little paranormal mind-candy, give D.D. Chance's Tywst Academy series a try. 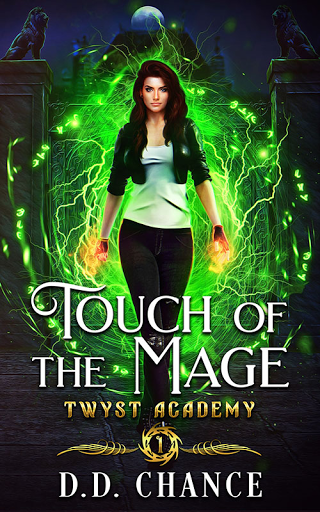 TOUCH OF THE MAGE
Book 1 of the Twyst Academy

Life at the academy just got… messy.

I’ve always dreamed of getting into a top college, but after a stint in juvie, my school prospects went sideways fast. Now I work at a magic academy…as a janitor. Ironic, right?

Okay, so maybe I get a kick out of secretly solving the arcane equations the professors leave on the board for the rich, entitled student wizards. I’m broke, not stupid.

Except then I get caught by the hottest mage on campus…who ropes me into helping him and his three equally gorgeous friends win a decidedly screwed-up magic competition.

Easy enough, I think—until I start setting things on fire and getting chased by smoke-faced monsters and fighting side by side with four of the sexiest, most powerful wizards ever…and find myself—just maybe—falling in love…

With all of them.

Note: This is a slow burn, New Adult paranormal academy romance, and book 1 of 4 in the completed Twyst Academy series.