See, dear readers, Marcella tried to be sneaky on Friday and slip the announcement of her latest short story at the end of her post. I, as the gleeful herald of our merry SFF 7 troupe, do not do sneaky. I shout book news from the headlines and the socials, so.... ~clears throat~
FOR A LIMITED TIME ONLY: 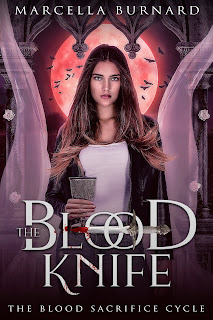 THE BLOOD KNIFE
by Marcella Burnard
Someone is sacrificing innocent people in the Seattle Underground. The murderer is trying, and succeeding, to raise a rogue vampire assassin. Rose Buchanan has the magic and the will to stand toe to toe with Vampire Magic. Including that possessed by the gorgeous blue-eyed vampire assassin who kidnaps her in a bid to pull a suspect list from her mind. When he can't overcome her will, he releases her and sets out to woo it from her instead.
When she's freed, Rose is more than ready to stake herself a vampire, but he's a witness to the three murders. She can't destroy him. Yet. Worse still to have to try to work with him when he keeps dialing the charm to 13.

Gethin is a vampire assassin forged long ago to police the Vampire Nation under the control of the Vampire Council. Now, the council believes the time of the assassins has passed. One by one, Gethin's fellow assassins and their Blood Knives have been destroyed. Only he remains, his Blood Knife in the hands of a murderous, unhinged human.

Rose has a choice to make. Destroy Gethin or find a way to free him and make the entire Vampire Nation her enemy.