Just a flower about to burst into bloom on the lanai. I was told it was a form of orchid. To be sure, it's an epiphyte, but I'm not so sure about the orchid thing. It's a Medinilla magnifica. 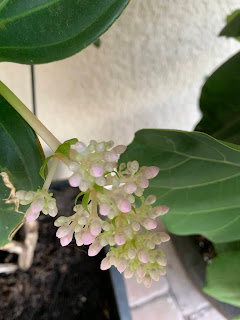 I'm using this photo here because I want to make the point that ideas are as numerous as the clusters of flowers on this plant. You either enjoy them when they bloom or you lose them when they drop, which happens frequently. Like so many tropical and subtropical plants, the flowers don't all come out at once. They emerge in waves and they drop in waves. No sooner have you swept up one mess of rose grapes, which these are also called, and another set are falling.
There's my idea metaphor.
Gather ye the buds of ideas while ye may. Cause sure as you sleep on 'em, they'll be gone like ghosts in the rising sun. Waking life ideas are easy. Say you're in the shower. You get an idea followed by another and another. Those ideas are related or they wouldn't have triggered one another. NUMBER THEM in your head. Assign each a single key word. REPEAT THEM. Then finish your shower asap, GTFO, and find paper. Or whatever recording device you need. Your phone has a recorder on it. Record the idea. There's a notes app. Use that if you have to. I prefer either paper or just getting an idea to a computer. The whole strategy for me is to find just that one single key word that opens out the entire idea when I repeat it.
But. As I said. The One Thing Guaranteed to Fail: lying to yourself about remembering that idea that comes to you in twilight sleep - in that moment between waking and dropping into slumber. You don't want to rouse yourself. So you number the ideas. You key word them. You repeat them. And when your alarm goes off, all you'll remember is that you had ideas and now, they're gone. The only solution here is a pad of paper beside the bed and a book light. I used to use sharpie and write on my palm when I got ideas in the middle of the night. That gets really, really hard to read when you write over something you've already written, so seriously, don't do that. A little note book and an unobtrusive light source will make  you much happier and you won't hate yourself in the morning.
Posted by Marcella Burnard at 12:30:00 AM