Painted Yourself into a Corner? Retcon FTW! 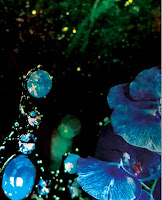 Our topic at the SFF Seven this week is "World Rules and Painting Yourself into a Corner: What's a rule of your world established in a previous book that complicated things for you in a later book?"

This has happened to me SO MANY TIMES.

It's a downside of writing for discovery or being a gardener - which some people call "pantsing" - because I discover the world as I write the story. Sometimes I'm writing a later book in a series and I discover that some decision I made in an earlier book is limiting what I can do. The real bite is this is almost always some minor, stupid detail that I just threw out there for no good reason. Very often, it could've been left out entirely and nothing would've changed.

I've actually learned from past errors this way, and I'm much more careful these days about adding random worldbuilding details unless I'm SURE I want to live with them.

Except for one I found recently.

I've been writing book 3 of the Forgotten Empires trilogy, THE PROMISED QUEEN (cover teased above). That means I've been listening to the audio books of THE ORCHID THRONE and THE FIERY CROWN, just to gather up all the threads of the story. Well, I found a careless remark in THE ORCHID THRONE that blows a huge part of the worldbuilding reveal in THE PROMISED QUEEN. As in, totally contradicts what we discover later.

And it's not even important, that toss-off line in THE ORCHID THRONE! I could've deleted it and no one would've cared or noticed.

I had three choices, I figured:

1) Change my big reveal in THE PROMISED QUEEN*

I'll even confess here how I did it, though I won't give the details of the exact mistake. I had Lia said she lied. It actually works just fine because she's an accomplished liar - self-confessed - and she had good reason to lie about that thing, at that time and place. Is it perfect? Maybe not. Does it work? I think so.

*No way
**Risky, because I know one of you would pick up on it
***For those who don't know, retconning is short for "retroactive continuity" and it means to "revise (an aspect of a fictional work) retrospectively, typically by introducing a piece of new information that imposes a different interpretation on previously described events."