Notes for Stories Collect Dust While I Write Other Books

Our topic at the SFF Seven this week is all about Ideas. How do you write down or remember those great ideas that you get mid-shower/dream/car drive? If you lose them, how do you get them back?

As an author, I have wisps of ideas and plots running around in my mind all the time (I’m good at multitasking!). Sometimes I’ll read an article that inspires a plot idea or occasionally one will come to me out of the blue. I usually write myself a one sentence note with the gist of the idea and then I have a folder stuffed full of these. The thing is, I almost never refer back to them.

I’m always working on a book and I’m always thinking about the next two books to come, even if they aren’t in the same series or even the same universe. I keep a constantly simmering ‘pot of stew’ going in my head with ideas for these books and will rarely allow myself to get distracted by anything newer or shinier. These three books – the one I’m writing, the next one I’ll write and then the most likely one after that – ARE the shiny for me. So for example, right now I’m writing a Star Cruise story set on my interstellar space liner, which is for the Pets in Space® 5 anthology, due out in the Fall. The next book will most likely be either JAMOKAN or TRATUS, which are both in my Badari Warriors science fiction romance series. I’m debating between the two of them as to what’s up first. The third book in my mind’s queue at the moment is either one set in my fantasy world of Claddare, or maybe an Egyptian…or one of these could be my fourth in line, if I write Jamokan and then Tratus. 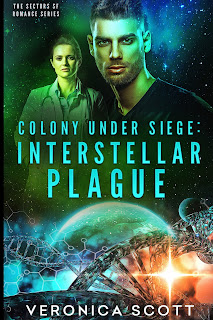 BUT, this week I’ve become enamored of one of my older ideas and am severely tempted to write it after Jamokan. I have to go where the Muse has the energy to be in order to write my best books and to have the creative flow. I’ve learned my own process pretty well over the years! This particular plot is one I’ve been mulling for years, off and on, but it never bubbled up to the top of the list for whatever reason. The same thing happened with COLONY UNDER SIEGE: INTERSTELLAR PLAGUE, which I released in June. I’d had it in mind to do forever but then the pandemic made it the only thing I was in the mood to write and so I did.

This portion of the writing year is a bit under constraint because I can’t release a scifi romance in the same time as Pets In Space (we don’t compete with ourselves), but I do have to keep paying the rent and the bills, so I need to keep my releases coming on a more or less regular schedule. So, the fantasy or the Egyptian might come next after JAMOKAN  purely due to scheduling concerns. Luckily I love writing in both worlds but my fan base is smaller than for the SFR.

If a random idea really strikes a chord with me, I won’t forget it. I may take years to actually use it in a book, but it’ll always be there, in the Muse’s list of ingredients.

On really rare occasions I might wake up in the morning with an entire book in my head (well, as completely as I ever plot in advance – the beginning, the ending, the hero and heroine and a few major scenes) and I know I have to set aside everything else and just write this book. Those plots are a gift not to be squandered and they kind of write themselves. This is where it’s helpful to be independently published as I don’t owe anyone anything under a contract with a hard date. Pets in Space is an exception.

The other thing I have to be careful of is not thinking through an idea too much before writing it. I used to have a two hour commute that could become three hours or more on the Southern California freeways. I also used to get anxiety attacks after a really bad 1982 accident (long story, on a freeway offramp, locked the brakes, rolled the car three times, ended upside down after knocking over a tree, broke three ribs..). One day I was stuck in traffic, on the way to work, anxiety giving me hell…so I told myself a story. You can safely do that if your car isn’t moving or only inching forward in occasional bursts. It was a scifi ghost story, set in space on an abandoned colony. I seriously gave myself goose bumps because it was so darn scary. And then the traffic eventually opened up, I got to work and was late for meetings that day, etc., so I never wrote any of it down. It was one of those shining magic stories that I should have dropped everything to actually write but at the old day job that certainly wasn’t a possibility. Bosses paying you to work don’t exactly resonate with you shutting your door and writing a novel on their time.

Will I ever write it? I haven’t forgotten the essentials and at one point I did write maybe the first 1000 words but the magic of it was gone. The Muse felt we’d been there and done that and weren’t going back. If I think about a story too much, I can’t write it, and on that commute from hell, I’d let myself develop the entire story, like a movie, down to the details so I wouldn’t have a major anxiety attack and pass out in the (allegedly) fast lane. Soooo, I kinda doubt it but never say never. If I got a new wrinkle or twist to add, then maybe. But for now the few notes and words there are on it reside in that bulging, never opened “Note for Stories” folder in the old beige file cabinet.