Our Saturday blogger and publishing powerhouse Veronica Scott released the latest in her Badari Warriors SciFi Romance series this weekend, so for those of you building your payday book list, be sure to add IVOKK to your cart and savor the Happily Ever After! 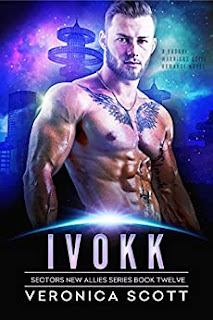 IVOKK:
A Badari Warriors SciFi Romance Novel
Proud enforcer of the Badari South Seas pack, Ivokk undertakes a secret mission back to their former home, in search of a cure for a mysterious illness affecting his soldiers, now in exile in the north. He’s ready to make any sacrifice to find the answer and help his pack brothers stay strong. He’s even willing to accept responsibility for the human woman assigned to the mission, although she’s a headstrong civilian, difficult and rumored to dislike his kind.

Sandara DiFerria was once a three-star chef in the Sectors, but that was before the alien enemy kidnapped the entire adult population of her colony to use for experimentation. Rescued from the labs by the Badari, she does her part to support the rebellion now by running the vast commissary operation in Sanctuary Valley. All she asks is to be left alone until she can get back to the Sectors and pick up her old life again. Her one previous romantic brush with a Badari soldier turned out badly, ending in public humiliation. Add to that post-traumatic stress from her life before moving to the colony and she’s the last person to pick for a top-secret mission. Or so she believes.